Charles de Lauzirika (born August 17, 1967) is an American documentary filmmaker, director and DVD and Blu-ray producer who directed the making-of documentaries The Beast Within: Making Alien, Superior Firepower: Making Aliens, Wreckage and Rage: Making Alien3, One Step Beyond: Making Alien Resurrection and The Furious Gods: Making Prometheus. He has also produced many of the home video releases for the Alien franchise, and was in charge of creating the Special Edition of Alien3 after the film's original director, David Fincher, refused to be involved.

Lauzirika at a Prometheus press event.[1]

Lauzirika, wearing an Aspen Beer shirt, and Ridley Scott on the set of Prometheus.[2]
Add a photo to this gallery 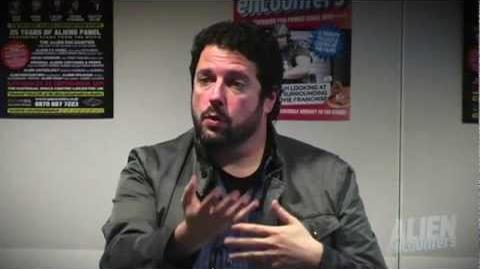 Retrieved from "https://avp.fandom.com/wiki/Charles_de_Lauzirika?oldid=243379"
Community content is available under CC-BY-SA unless otherwise noted.