Xenopedia
Register
Don't have an account?
Sign In
Advertisement
in: Pages with reference errors, Yautja individuals, Predators featured in the movies,
and 4 more
English

Ian Whyte[4]
Celtic[5] was a Young Blood Yautja who, in 2004, travelled to Earth with his brothers[2] Scar and Chopper to undertake an initiation Hunt in an ancient Predator pyramid beneath the ice on Bouvet Island. In stalking and killing Xenomorph prey, they hoped to become Blooded Yautja.[6]

Although each of the Predators was a relatively inexperienced juvenile, Celtic was the oldest of the three brothers[7] and acted as the leader of the group.[8][7] During the ritual hunt, he killed at least one human and engaged the Xenomorph Grid in single combat. However, despite initially having the upper-hand, his overconfidence ultimately got the better of him and he was killed by the Drone. As a result, Celtic failed to slay any aliens and thus never became Blooded.

Upon reaching the surface camp set up by the Weyland Industries expedition at Razorback Point Whaling Station, Celtic and the other Yautja with him began quickly dispatching the drillers and mercenaries stationed there. During the slaughter, Celtic confronted Quinn, engaging him in close quarters combat. Quinn was no match for the Predator and after a brief tussle, Celtic knocked him down the access tunnel that led to the pyramid thousands of feet below, where he was later finished off by Scar.

Upon entering the pyramid, the Yautja discovered that the humans had taken their Plasmacaster from the sarcophagus in which they were kept, and the creatures endeavoured to hunt down those responsible; they split up to cover more ground.[9] Celtic later caught up with several of the survivors and attacked, trapping Stafford with his Netgun before impaling him with his Combistick, killing him. Sebastian de Rosa assaulted Celtic, who responded similarly and started choking the human. Suddenly, the Yautja witnessed Chopper being ambushed and killed by a lone alien Drone known as Grid. Angered by the death of his fellow Young Blood, Celtic immediately tossed Sebastian aside and engaged the alien in a duel. The fight was long and brutal, with Celtic dominant, slicing off Grid's tail blade and trapping him with his Netgun, badly scarring him. However, as the Predator drew his Ceremonial Dagger to finish the netted Alien, Grid broke free and tackled Celtic to the ground, killing him with a Headbite.

Celtic was a very large, impulsive and aggressive Yautja who seemingly preferred using his own brute strength in combat. His aggressiveness and brutish nature clearly showed, as Celtic had amassed the most kills of the three brothers.[7] However, he was still considered an inexperienced Young Blood.

Despite his ruthlessness, Celtic was an authoritative and honorable hunter who followed the Yautja Honor Code, as he was only shown killing those who had attacked him in some way.

Celtic was very egotistical and quick to anger; it was his blind rage in attempting to avenge his fallen brother, Chopper, that ultimately proved fatal for him, as despite having the upper hand during most of his and Grid's fight, he dawdled relishing his kill, giving Grid the opportunity to break free and kill him.

Due to possessing the highest killcount of the three brothers,[7] Celtic carried a variety of equipment during his Rite of Passage Hunt in Antarctica, some of which were exclusive to him. As with his fellow Yautja, Celtic wore a bio-helmet, which received four scratch marks over the left eye when Grid scratched it with its claw. On the left side of his back, Celtic carried a Plasmacaster, which was positioned over his left shoulder and a Medicomp, which was located to the right of the Caster. On the right side of his back, Celtic carried a Combistick. On his right wrist gauntlet, Celtic was equipped with dual Wristblades which could extend to two lengths and have the direction of the blades reversed. On his left gauntlet he was equipped with a Netgun. On his belt, Celtic carried a retracted Shuriken. On the right side of his right leg, Celtic carried a Ceremonial Dagger in a sheath, which he drew to finish of Grid when the latter was trapped in his Netgun's net. However, Grid managed to escape the net just in time to tackle Celtic, knocking away the Dagger.

The basic body suits for all three Predators in Alien vs. Predator — Scar, Celtic and Chopper — were actually poured from the same mold, before being customized after the fact to make each character appear unique. Sixteen suits were created, each painted in the same color scheme so that they could be replaced at any time if necessary.[4] As in Predator 2, the armor was created separately as the script required it to be removed; armor pieces, made from either fiberglass or flexible urethane, were used to customize the suits and create the three different individuals.[4] Celtic was given Wristblades similar to those seen in previous films, a new, sleeker Combistick and a Netgun on the left forearm gauntlet. Celtic's helmet, as his name implies, was modelled on Celtic knotworks.[4]

Hunter- from Aliens Vs. Predator 2010- was based off of Celtic. 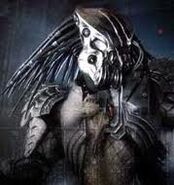 Celtic immediately before he is killed by Grid. 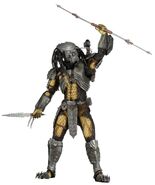 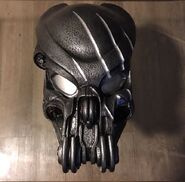