"I may act as if it doesn't bother me -- but the truth is, living out here so long without another human around can drive a guy, well -- a little crazy."
―Nordling to the Strunks (from Aliens: Stronghold)

Blue
Doctor Caspar Nordling was a biotechnologist for the Grant Corporation and director of his research facility, staffed entirely by Synthetics. Nordling's work involved studying the Xenomorph species in order to develop a deadly virus capable of proving fatal to the creatures, but not to Humans.

Years in isolation without human contact would eventually take its toll on Nordling's sanity, and he lost his mind in his work. He would subsequently sell his facility's Eggs on the black market. When security auditors Philip and Joy Strunk began catching on to his suspicious activities, he would attempt to have them murdered by drugging them and transporting them into the facility hive, though they escaped with the help of the android Jeri.

Nordling was killed by Jeri after he sneaked inside his escape pod and lit a virus-laced cigar, puffing smoke directly into his face.

"Umm, I'm curious, isn't it lonely out here? I mean, being the only human, and all?"
Oh, synths aren't such bad company. In fact, they don't smell as bad as some humans I know. Unless they cut themselves. That white juice that leaks out really stinks! And they always do exactly what I tell them to do
"
―Philip Strunk and Nordling (from Aliens: Stronghold)

After security auditors Philip and Joy Strunk began landing at Nordling's facility to deliver spare synthetic parts, he is alerted to their presence by his synthetic secretary Lizzy. Nordling personally greets the Strunks and introduces them to his staff, including the synthetic, talking Xenomorph, Jeri. Nordling enjoys making Jeri smoke cigars for his amusement, much to Jeri's embarrassment, and has him do the trick in front of the Strunks, much to their bemusement.

Nordling goes on to detail his work to the Strunks; the doctor is using the creatures to engineer a virus that could eliminate them. He subsequently introduced the two to Lizzy, whom he gropes inappropriately in front front of the two.

Following a snafu within the hive, Combat android Dean is sent in and swiftly puts an end to the carnage. Later, Philips catches Caspar cruelly experimenting on a Xenomorph Chestburster, needing extra assistance unloading the cargo, they go down to the facility where synthetic Dr Payne resides, Payne's duty is to repair injured or destroyed synthetics, and clearly dislikes Nordling. Nordling requests that Payne hurry his repair duties, as following the hive incident, the crew are in dire need of extra synthetics. After Payne dismisses his request, an enraged Nordling physically assaults the android and threatens him. Philip breaks up the two, with Nordling storming out in a huff.

The Strunks are later invited to dinner by Caspar, and after an awkward meal, Joy, sick of Nordling's erratic behavior, berates the scientist. The two suddenly come to the realization that he had drugged their wine, and subsequently fell unconscious. The two awaken within the hive and are about to be Facehugged,, but are subsequently saved by Jeri, who swiftly takes the two of them to safety.

Meanwhile, it is revealed that Nordling has been selling acquired Xenomorph Eggs on the black-market to criminals, and was busy with a transaction with the smuggler Chaut. Though Chaut attempts to threaten Nordling, the doctor has Dean loom over Chaut, putting him in his place. As a parting gift, he gives Chaut a box of Earth-grown cigars. As Nordling was fully aware that the money Chaut gave him was counterfeit, he had laced the cigars with one of his deadly-viruses that could only be activated by extreme heat. As a result, Chaut and his crew had all been killed after he had lit one of his cigars from within his ship.

Chaos in the facility

"Lowlife synths think they've got me, but they're wrong. They just don't know how much of a bastard I can really be, but they're gonna find out"
―Nordling (from Aliens: Stronghold)

They go into his office to access his classified information in hopes of accessing their ship, but Dean suddenly crashes into the office and restrains Jeri. Nordling emerges and holds the Strunks at gunpoint and taunts their efforts. However, after Jeri identifies himself to Dean, and Dean releases him, the group realizes that Dean is not hostile. Philip subsequently attacks the scientist, but he is saved by Lizzy. Jeri in retaliation, cuts her hand off and bisects her head, and the three retreat.

The Strunks and Jeri subsequently joined forces with Payne and rest of Caspar's synthetic staff defying him, and they begin destroying all remnants of the doctors' work. Nordling and Lizzy enter during the chaos and Nordling is distraught, his life's work rendered moot. Enraged, Nordling berates the group before pointing his gun at Philip, but not before Philip opens fire at the doctor. However, he is inadvertently saved by Jeri, who tackles Philip to the floor (his First Law programming disallows any harm to come to another human), giving Nordling and Lizzy enough time to retreat.

Taking Lizzy with him, Nordling ends up retreating and overriding the security measures to the hatch of the facility's hive entrance, causing a horde of Xenomorphs to flood out. As the two make their way to the emergency escape pods, they are later cornered by a small group of Xenos. With her First Law programming still intact, Lizzy ends up sacrificing herself to save Nordling, lunging herself at the Aliens and being torn apart, giving him enough time to kill the creatures with his handgun. In spite of her sacrifice, Nordling was callous and unsympathetic to her dying calls, and ultimately abandoned her.

"Jeri, you light that cigar, you'll kill me! That's in direct violation of your prime directive!!"
―Nordling to Jeri (from Aliens: Stronghold)

Nordling, alone, managed to reach his escape pod and escape the facility. However, a severely damaged Jeri had sneaked aboard with him, and despite his pleas to spare him, ends up lighting a virus-tainted cigar that he used to poison Chaut, with Jeri citing "I still know a son of a bitch when I see one". Ironically, it was Nordling's favourite trick that killed him, ending his madness once and for all.

Unlike fellow scientists Paul Church and Ernst Kleist, Nordling made no effort to hide his depravity, and the Strunks caught on very quickly that the man was clearly insane. Caspar was cunning, two-faced and sociopathic, and had no qualms with using underhanded, illegal and immoral methods to achieve his goals. He also held a very low opinion on synthetics, an example of this was when he happily abandoned a critically damaged Lizzy, in spite of her just saving his life moments after. It was also highly likely that he was using Lizzy as a psuedo-sex synth. 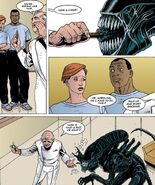 Experimenting on a Chestburster.

Assaulting Payne.
Add a photo to this gallery
Retrieved from "https://avp.fandom.com/wiki/Caspar_Nordling?oldid=265264"
Community content is available under CC-BY-SA unless otherwise noted.