Carl Weathers (born January 14, 1948) is an American actor, director and producer who played Dillon in the 1987 film Predator. He is perhaps best known for his role as Apollo Creed in the Rocky series (1976-1985). Other notable films Weathers has appeared in include Magnum Force (1973), Close Encounters of the Third Kind (1978), The Defiant Ones (1986) and Happy Gilmore (1996). Aside from his work in film, Weathers has had an extensive career in television; there he is perhaps best-known for playing a tight-fisted parody of himself in the sitcom series Arrested Development (2003-2013). Notably, footage of Weathers playing Dillon is also used in that show. 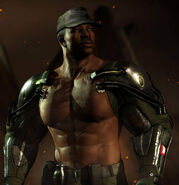 Carl Weathers as Jax
Add a photo to this gallery

Retrieved from "https://avp.fandom.com/wiki/Carl_Weathers?oldid=253934"
Community content is available under CC-BY-SA unless otherwise noted.