"Unlike the hunting parties of young males we'd captured before, this one was older, stronger..."
―Mother, about the captured hunters and Scarface

The Captured Hunters were three unnamed young Yautjas captured and experimented on by Borgia Industries. They were a part of the Dark Blade Clan.

Seeing as Yautja often hunt in trios and these three hunters were captured around the same time, it is safe to presume they were of the same hunting party. The circumstances of their capture is unknown, however they were taken by Borgia Industries where their anatomy and physiology was studied. The Industry also drained their blood, collecting it in blood packs for later use, and performed autopsies and augmentations on their bodies. Likely, they would've shared the same fate as a former hunting trio: Swift Knife, Long Spear, and Stone Heart. 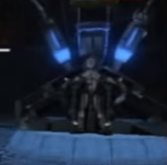 These Yautja can be found in the "Rescue" mission of Concrete Jungle. They are bound in labs, similar to the one holding Scarface, but since they are just Young Bloods, the security around them isn't as thick. They can be freed by destroying the canisters powering their shackles and will assist the player in escaping the lab.

They will not assist the player in later levels, disappearing after Rescue, leaving their fates ultimately unknown.

Captured Yautjas are stripped of all weaponry and technology, nothing but their loincloths left on their person. They retain the ankle and wrist cuffs of their imprisonment and are noticeably smaller and slighter than Scarface, an adult predator. Whether this is due to young age or poor nutrition due to captivity is unclear.

Most notably, their Dreadlocks have been sheared down to stumps while Scarface's are left intact. It is unknown why this is.

Retrieved from "https://avp.fandom.com/wiki/Captured_Hunters?oldid=245562"
Community content is available under CC-BY-SA unless otherwise noted.