The Bull Alien is a part of the Aliens toy line produced by Kenner Products.

The Bull Alien is spawned from cattle hosts and has two horns on its head, and is very quick (able to outrun Stinger XT-37s) and powerful. This large Xenomorph variant can knock down military vehicles by rushing in. It is also very durable, capable of taking a rocket to the face without even flinching. Only fire seems to kill them.[citation needed]

Bull Aliens commonly operate in herds, another trait they inherit from their host.

The bull alien has a similar demeanor to both the Rhino Alien and the Crusher, due to the fact that they are all quadrupedal, extremely aggressive and use their large heads to ram their opponents.

Bull Alien figure out of the package. 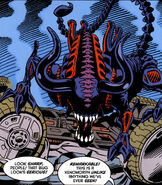 The Bull Alien as seen in the Kenner comics.

Concept art of the Bull Alien. 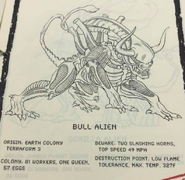 The Bull Alien from the Operation: Aliens trading cards. 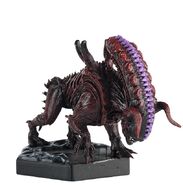 Eaglemoss Collections figurine of the Bull Alien.
Add a photo to this gallery
Retrieved from "https://avp.fandom.com/wiki/Bull_Alien?oldid=256009"
Community content is available under CC-BY-SA unless otherwise noted.