Smart Ass
Bug Stomper was a UD-4L "Cheyenne" Dropship aboard the USS Sulaco, piloted by Corporal Colette Ferro. It was notably involved in the initial USCM operation on LV-426 in 2179.

Bug Stomper was the dropship utilized by the Marines during the initial combat stages of the mission, and it was used to deploy ground forces to the Hadley's Hope colony. It was ultimately destroyed in a crash landing when its crew was slaughtered in flight by a Xenomorph Warrior.

Bug Stomper was used for the initial drop onto the surface of LV-426, deploying a detachment of Marines under Lieutenant Scott Gorman's command. As per typical rapid deployment doctrine, the dropship released the M577 Armored Personnel Carrier it was carrying on the moon's surface and then immediately moved into an overhead support pattern, providing aerial surveillance of the Hadley's Hope colony and its surroundings as the Marines advanced.

Once ground forces had secured the area, Bug Stomper pulled out and set down some distance away from the colony to await fresh orders.

Unfortunately, at least one Alien Warrior slipped aboard the dropship while it was on the ground. Following a disastrous ambush in the colony's Atmosphere Processing Plant, Bug Stomper was called upon by the surviving Marines for immediate evacuation. En route, its flight crew, consisting of pilot Ferro and weapons chief Daniel Spunkmeyer, were attacked in mid-air; Ferro was killed while still sitting at the controls. The dropship consequently crashed before ground troops could be picked up.

In a cruel twist of fate, the crashing Cheyenne also destroyed the Marines' APC and much of their equipment with it. The flaming wreckage then tumbled into the Atmosphere Processor, causing considerable damage that contributed to its later meltdown and destruction.

Despite this, in an ironic silver lining, the later meltdown and destruction of the Atmosphere Processor meant that the Warrior on board the Bug Stomper indirectly doomed its own Hive. 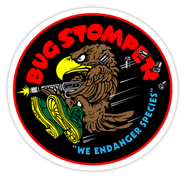 The Bug Stomper logo on the dropship's nose

An APC being loaded into Bug Stomper

Bug Stomper aboard the Sulaco

Bug Stomper right before the drop to LV-426's surface.

Bug Stomper, as it appears in Alien Trilogy.
Add a photo to this gallery

[2]
Add a photo to this gallery

Retrieved from "https://avp.fandom.com/wiki/Bug_Stomper?oldid=245636"
Community content is available under CC-BY-SA unless otherwise noted.