The Borrowdale was a colonial transport vessel. During a routine voyage, the ship was overwhelmed by a Xenomorph outbreak, originating from samples being studied by the Weyland-Yutani science team on board. The incident led to the death of most of the crew, while the ship itself was destroyed by members of the science team in an effort to contain the creatures. 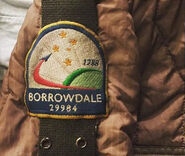 The Borrowdale crew patch, featuring the Southern Cross and the date 1788.[1]
Add a photo to this gallery

Retrieved from "https://avp.fandom.com/wiki/Borrowdale?oldid=240937"
Community content is available under CC-BY-SA unless otherwise noted.