Body Armor (Awu'asa[1] in the Yautja language) is a protective but sectional assemblage of armor worn by Yautja across the body while on a Hunt. Interestingly, Hunters rarely wear full protective suits of armor. The reason for this is never explained, although since the Hunt requires stealth, speed, and fair bit of athleticism, Yautja may forgo it for this reason as heavy armor often sacrifices mobility. However, some Yautja choose to wear less armor as a silent testament of their (perhaps perceived) skill.[2]

Predators are rarely seen without armor, and if they are it is either because they have been forcibly stripped of it or they are not currently on a hunt. Otherwise, even the fiercest predators take care to armor their bodies before a hunt. Even when their armor is damaged, Hunters take the time to create makeshift armor for themselves and possibly any packmates. In the novelization of Aliens vs. Predator, Scar uses a deceased Drone to fashion armor for Lex. In Predator: Hunters, when a ship crashes and leave several Yautja stranded on an island, they quickly fashion weapons and armor from the resources around them, making makeshift, primitive hunting tools.

The process of fashioning armor has never been seen or described in depth, but some armor is special and given to a hunter after they attain a certain rank, particularly the bio-helmet.[3]

The armor of a predator varies from Clan to clan, and even within the clan from individual to individual. An example of this is the three hunters, Scar, Celtic, and Chopper, who were from the same clan but had noticeably different armor. The Super Predator clan are another example. Even with individual differences, armor is usually composed of a partial or full breastplate, pauldrons, gauntlets, extremity armor, neck armor, and most notably, the bio-helmet.

Predators also use armor and fabric to protect and hide their groins and genitals. Another portion of the armor is their thermal netting. According to Prey, it allows a hunter to adjust the temperature of their body to something more comfortable if the surrounding clime does not suit them. According to the AVP Novel, Yautja's are ectothermic, relying on outward sources for heat and the netting is hot to the touch, as it's point is to keep it's reptilian wearer warm. Even the lowest setting is fairly uncomfortable for Humans. Not all Hunters have this netting, as the Super Predators seem to forgo it, perhaps suggesting they are more mammalian than reptilian. Alternatively, as a different clan from the Jungle Hunters, they may simply lack the technology to utilize it.

Often, armor is fashioned by or adorned with the bones or hide of hardy prey, as is the case with the Spear Master and Alien Head Predator.The predator's armor seems to be the only kind of "clothes" they wear. Otherwise, they are quite content to walk around with only fabric around the waist keeping them decent. Big Mama had no qualms running about naked when she escaped her human captors and in the novelization for AVP 2K4, Scar shamelessly stripped off his armor in front of Alexa Woods (much to her alarm and embarrassment). This seems to suggest Yautja do not share humanity's concern with a lack of clothing.

Not all predator armor is created equal. Un-Blooded predators, in particular, often do not have armor and when they get it, the plating is mismatched and likely ill-suited for them. This is intentional, and only when hunters reach Young Blood status do they get a decent, personalized set of armor. However, this armor is not Acid proof, something else that is intentional. Only after killing a Xenomorph does a then-Blooded hunter receive a standard suit of armor.

In times of war, the Military Caste of Yautja will be called to the frontlines. Unlike hunter-class predators, these soldiers are clad from head to toe in Tactical Supremacy Armor. Unseen outside of this caste, this armor defends against bullets, toxins, Xenomorph blood, and even the Vacuum of space.

Much like your average predator, it includes a helmet, chest-plate, and extremity armor but also armor gloves, boots, and gauntlets that encompass the entire limbs. The Dreadlocks are not visible in this armor.

Celtic in his armor.

Top-Knot with no armor. 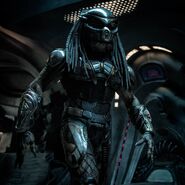 The unique Japanese-inspired armor of the Sengoku Predator.
Add a photo to this gallery

Retrieved from "https://avp.fandom.com/wiki/Body_Armor_(Predator)?oldid=257368"
Community content is available under CC-BY-SA unless otherwise noted.