"The Blazer Predator is a heavy support trooper capable of turning it's surroundings into a raging firestorm."
― Aliens versus Predator: Extinction

Blazers or Military Blazers were one of the two known Military Caste Yautja, the other being the Hydra. Name for it's weapon, the Blazer, a Blazer was capable of turning the surrounding area into a hellish inferno.

The Blazer was a Yautja clad in Military Supremacy Armor, nearly immune to acid, fire, and non-penetrating ammunition. Upon it's back is a specialized Plasmacaster, which it would use to burn through swathes of enemies. The Blazer, in particular, was called upon to kill escaped Queen Xenomorphs who had escaped Predator capture when re-capture was deemed impossible. By adding a second blazer, called Dual Blazers when wielded together, the power of this soldier is multiplied and a Blazer can set alight an entire platoon.

Blazers excel at dealing major damage to many enemies; it can even continue to fire on the move, unlike the Hydra, and is decently fast even with it's armor. In order to kill just one Blazer, the enemy must launch a sustained and coordinated attack. It's weaknesses are similar to the Hydra: armor rending enemies such as snipers or the Ravager can easily kill a Blazer. 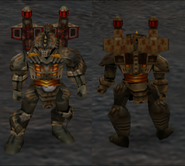 Add a photo to this gallery
Retrieved from "https://avp.fandom.com/wiki/Blazer_(title)?oldid=247738"
Community content is available under CC-BY-SA unless otherwise noted.