"Ash Parnall!"
―Big Mama (from Aliens vs. Predator: Deadliest of the Species)

Blooded (at least, likely an Elite)

Female Predator
Allied to a Human

Big Mama was a female Yautja that stalked Caryn and repeatedly called her Ash Parnell.

Big Mama is sent to hunt Caryn Delacroix, and does so in a reality simulator set up by TOY. However, she realizes nothing but the Predator was real and carves her way to where the Yautja is being held captive. Caryn releases Big Mama from the lab. Big Mama later became an ally and mentor to Caryn, even teaching Caryn how to fight, as she would an un-Blooded of her own kind.

Caryn and Big Mama, along with a group of mercenaries that were trained in the ways of the Yautja, and an unlikely ally, the Mother Queen engage in a battle against the White hybrids. Both the White hybrid King and Queen mother are killed by the emerging White hybrid chestburster (when the Queen mother grabs the hybrid king just as the chestburster emerges), which Big Mama steps in and kills. Caryn, now Ash Parnell, Big Mama and the chestburster that emerged from Caryn and aided the group leave while the rest of the white hybrids are destroyed. Big Mama was extremely protective and caring of Caryn as she would her own, and was a powerful warrior. 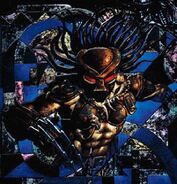 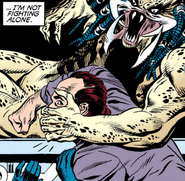 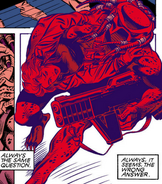 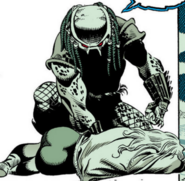 Add a photo to this gallery
Retrieved from "https://avp.fandom.com/wiki/Big_Mama?oldid=255596"
Community content is available under CC-BY-SA unless otherwise noted.