The Beluga-Xenomorph, also known as the "Holloway Alien"[1] after its host, was a Xenomorph creature cut from Prometheus early in its production. In Jon Spaihts' original script, titled Alien: Engineers, the creature stalked and killed several crew members of the Magellan.[2] Its role was entirely written out of the finished film.

After Holloway is attacked and impregnated by an Octo-Facehugger inside the Engineer structure on LV-426, he is found and rescued by Jocelyn Watts. The two return to the Magellan and make love, but as this happens the Beluga-Xenomorph emerges from Holloway, killing him. It attempts to attack Watts, but is forced to flee when several other members of the Magellan's crew intervene.[2]

The infant creature escapes into the bowels of the ship, where it rapidly grows and begins killing the crew who are searching for it. It later attacks Janek on the bridge as he and Watts attempt to stop the Juggernaut leaving LV-426 with its cargo of Xenomorph Eggs, although Watts is able to kill it with a sub-machine gun.

Unlike other Xenomorphs, which are encased in rigid, black mesoskeletons, the Beluga-Xenomorph is described as being ivory white and boneless, the latter of which allows it to alter its body shape and become a gelatinous, amorphous blob, allowing it to squeeze through gaps that would otherwise be too small for it.[2] Its skin is vaguely translucent, and at the front of its elongated skull, a human-like skull can be seen beneath. It has long, spindly limbs, and jaws that can lever forwards out of its mouth (a trait given to the Deacon in Prometheus).[2]

Another scrapped creature concept was the Babyhead, also known as the Beluga-Head. A small grotesque organism with slender legs that was supposed to form the final result of Sean Fifield's exposure to the black liquid. Originally conceived by Carlos Huante for the design of the aliens in Steve Spielberg's War of the Worlds film, the concept was brought back when Huante presented the concept art to Ridley Scott, with Scott taking a liking to it. H. R. Giger had also drawn a brief sketch of the creature. The creature was conceived to be roughly a few feet smaller than an average human, possessing long faun-like legs, small black eyes and an acid ball organ inside it's mouth (which also contained an extendable jaw).[citation needed]

Concept art of the Beluga-Xenomorph bursting from Holloway. 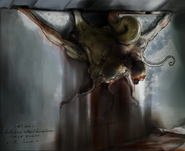 Concept art of the Beluga-Xenomorph Chestburster.

Concept art of the Beluga-Xenomorph Chestburster.

Concept art of the fully-grown Beluga-Xenomorph.

Concept art of the infant Babyhead. 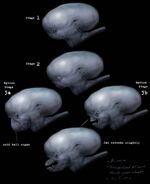 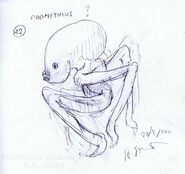 Concept art of the Babyhead by H.R Giger.