Dec 1991-Feb 1992
Batman versus Predator is a three-issue limited crossover comic book series that was first published by DC Comics and Dark Horse Comics from December 1991-February 1992. It was written by Dave Gibbons, pencilled by Andy Kubert, inked by Adam Kubert, colored by Sherilyn Van Valkenburgh, lettered by Adam Kubert, and edited by Diana Schutz, Denny O'Neil, Randy Stradley, Kelley Puckett and Jenette Kahn. The series was simultaneously published in both regular and prestige formats; the covers for the regular series were by Chris Warner and Gregory Wright, while the covers for the prestige version were by Arthur Suydam.

Batman versus Predator was the first comic book produced by Dark Horse that crossed the company's Aliens/Predator/Aliens vs. Predator properties with another franchise. It began a series of franchise crossover comics that has continued irregularly ever since, involving both other Dark Horse properties and those from other major publishers. In the overall Dark Horse crossover comics line, Batman versus Predator was followed by Predator versus Magnus, Robot Fighter.

#1: The hunter becomes the hunted as Batman, Earth's ultimate detective, is pitted against Predator, the galaxy's most ruthless hunter! Neither is known for their ability to compromise, assuring readers a break-neck paced three-issue series!

#2: The hunter becomes the hunted as the tale of Batman, Earth's ultimate detective, is pitted against Predator in the second installment of this blockbuster comics event.

#3: The final showdown takes place in the Batcave, as the wily Predator hitches a ride on the Batmobile. But man versus alien it isn't, as Batman discovers that Predator is not alone!

Batman versus Predator was first serialized and reprinted in the United Kingdom in 9 parts in Total Carnage #1-9, from April-December 1993.[1]

The comic was collected and released as a trade paperback in April 1993, with the title Batman versus Predator: The Collected Edition. The release was edited by Kij Johnson and Bob Kahan and featured a new cover by series writer Dave Gibbons.

The overwhelming success of Batman versus Predator would pave the way for numerous other crossover series involving Dark Horse Comics' various properties, the Aliens and Predator lines in particular, with other Dark Horse franchises as well as those from other companies. The comic would also inspire the popular and influential 2003 fan short film Batman: Dead End.[2]

Writer Dave Gibbons is also a famed comic book illustrator who was co-creator as artist with writer Alan Moore of DC's groundbreaking Watchmen, which was later turned into a theatrical film of the same name.

Cover to Batman versus Predator issue 1 by Chris Warner and Gregory Wright.

Cover to issue 2 by Warner and Wright.

Cover to issue 3 by Warner and Wright.
Add a photo to this gallery

Cover to prestige version of issue 1 by Arthur Suydam.

Variant cover to prestige version of issue 1 by Suydam.

Cover to prestige version of issue 2 by Suydam.

Cover to prestige version of issue 3 by Suydam.
Add a photo to this gallery 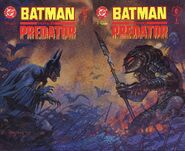 Full cover artwork to prestige version of issue 1 by Suydam.

Retrieved from "https://avp.fandom.com/wiki/Batman_versus_Predator?oldid=263105"
Community content is available under CC-BY-SA unless otherwise noted.