Batman: Dead End is a 2003 fan-made short film written and directed by Sandy Collora and starring Clark Bartram, Andrew Koenig and Kurt Carley. A crossover between the Batman, Alien and Predator franchises, it follows Batman as he pursues the recently escaped Joker, only to encounter both the Xenomorphs and Yautja in Gotham City. The short film premiered on July 19, 2003 at the San Diego Comic-Con, and was released on the internet shortly thereafter.[2]

As a fan film, 20th Century Studios had nothing whatsoever to do with the film's production and it is not considered a part of the official franchise. However, it has achieved official recognition — of a sort — by way of NECA, who have produced several Predator figures based on characters from the film. Since its release, Batman: Dead End has received considerable praise and brought attention to its director Collora. Well received by fans,[3] the film has been called not only one of the best fan films ever made, but one of the truest representations of the Batman character ever put on screen.[4]

The film begins with voiceover news broadcasts reporting on the Joker's escape from Arkham Asylum as Batman gears up to face his nemesis. The superhero catches up with the Joker at a deserted dockyard and chases him through the pouring rain. After a brief fight, the Joker and Batman both taunt each other over their perceived similarities, when suddenly the Joker is snatched from above by a Xenomorph Drone and dragged away, the creature presumably killing him off-screen. A second Drone rises behind Batman and pounces on him, pinning him to the floor, but before it can land the killing blow a triple laser pointer settles on its head and its skull suddenly explodes. Batman throws the dead Xenomorph away and looks up to see the culprit — a Predator. Batman hurls a Batarang at the Predator and destroys its Plasmacaster, forcing the creature into a hand-to-hand duel.

The brawl is brutal and lengthy, but eventually Batman manages to destroy the Predator's Wristblades with another Batarang before slicing open the creature's stomach and back, critically wounding it. The Predator falls to its knees, defeated. Batman prepares to finish off the alien hunter by driving his Batarang into the exposed back of its head, but is distracted by laughter from behind him. Slowly turning, Batman sees three other Predators, including one clad in distinctive red armor. Batman turns to face the trio of Predators, drawing a second Batarang, as a group of Xenomorphs emerge from the shadows behind him and the screen fades to black.

Director Sandy Collora, who was previously employed at Stan Winston's effects studio and worked as a conceptual artist on Predator 2, was inspired to create the short film by the comic book Batman versus Predator.[2] He decided that the project would serve as a good showcase for his talents as a filmmaker, hoping to draw attention to his skills.[5] The movie was made for a reported $30,000 and filmed in parts of North Hollywood, California, which stood in for Gotham City.[1] Owing to the small crew, even the producers helped out on set.[2]

The most complicated shot to film in the production was the scene where a Xenomorph lunges down and snatches the Joker into the air. Stunt co-ordinator Scott Leva recalled, "Ratcheting somebody out of frame is pretty simple. Dropping somebody into frame, grabbing and ratcheting them both out at the same time in sync was a little bit of a mathematical equation."[2] The Predator suits in Batman: Dead End were sculpted by Collora himself, who wanted the main creature to appear slightly more insectoid than previous Predators seen on screen, leading to its black and yellow hornet-like paint scheme.[2] The soundtrack to the film consisted of cues originally composed by Danny Elfman for the 1989 theatrical film Batman.

Response to the film has been very positive, with the film labelled "one of the most elaborate, most watched, most talked about" short films ever made.[5] It drew praise from notable industry figures, including film director and comic book writer Kevin Smith, who labelled it "possibly the truest, best Batman movie ever made",[4] and comic book artist Alex Ross, who praised it as "Batman the way I've always wanted to see him".[6] Fan Films Quarterly listed Batman: Dead End as one of the 10 most pivotal moments in fan film history in its Summer 2006 issue. Collora has stated in interviews that, given his original intention of making a demonstration reel to attract attention to his directing skills, the film was a resounding success.

12 years after the film's release, Collora produced an in-depth, feature-length documentary exploring the making of the film and its impact on the genre, named Behind the Mask: The Batman: Dead End Story[7] (previously known as Batman: Dead End: A Ten Year Retrospective).[5] 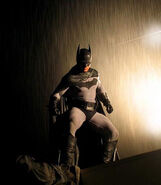 Batman as he appears in the film.

Batman fights with a Predator.

The three Predators that appear at the film's conclusion. 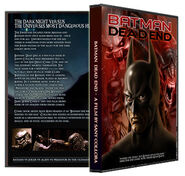 The film's (unofficial) DVD release.
Add a photo to this gallery 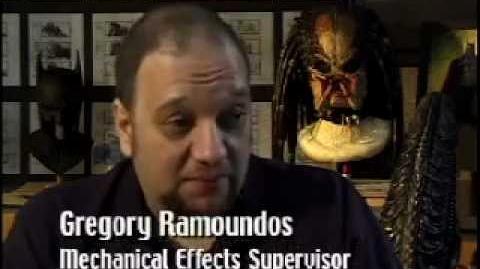 Retrieved from "https://avp.fandom.com/wiki/Batman:_Dead_End?oldid=256663"
Community content is available under CC-BY-SA unless otherwise noted.