"But unlike others of its species, this alien intruder is no sport hunter, but a crazed psychotic, a butcher of its own kind, an unhinged killing machine."
―Description of the Bad Blood in the publisher's summary of Predator: Bad Blood issue #1.

The Bad Blood Predator was a rogue Yautja that wreaked havoc and started a murder spree in the city of New Jersey. Its notoriety later earned the attention of an Enforcer Predator that was sent to put an end to its disgrace. It was eventually killed by black-ops member Mandy Graves, but only after it had slaughtered her entire team as well as her husband Robert Graves.

Mentally unstable and totally unhinged, this Predator had freed itself from the restrictions of the Yautja Honor Code and was thus free to kill whatever it wanted whenever it pleased. It had no compunction about slaughtering and flaying its own kind.

Unlike most Predators, this one preferred to keep the severed heads of its victims as trophies instead of their skulls, keeping numerous heads on its belt. Additionally, it also possessed distinct shoulder plates and knee braces made out of the bones and skulls of its prey, including a Yautja skull on its left shoulder and a creature's spinal column on its right. 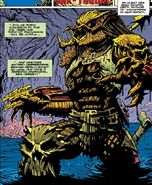 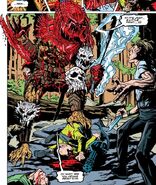 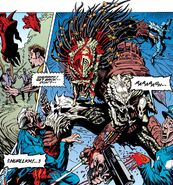 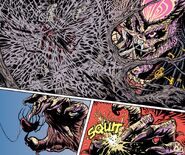 The Bad Blood inspecting a spider. 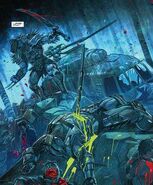 The Bad Blood from Predator: Hunters.

NECA figure of the Bad Blood Predator.
Add a photo to this gallery
Retrieved from "https://avp.fandom.com/wiki/Bad_Blood_Predator?oldid=245568"
Community content is available under CC-BY-SA unless otherwise noted.