"Something's on this station. Something you wouldn't believe."
―Axel (from Alien: Isolation)

George Anton
Axel Fielding[1] was a resident of Sevastopol Station. When a lone Xenomorph was unleashed on the station by the crew of the USCSS Anesidora in 2137, he became one of the survivors desperately waiting for rescue. He encountered Amanda Ripley when she arrived on Sevastopol aboard the USCSS Torrens to recover the USCSS Nostromo's flight recorder, which had also been brought there by the Anesidora.

Axel was killed by the Alien in front of Amanda when it ambushed him in a transit station, impaling him with its tail and dragging him into a ventilation shaft.

Axel had made friends with new resident Mike Tanaka with both of them usually attending various food breaks together.

When chaos began ensuing in the recently decommissioned Sevastopol, Axel was able to escort Mike to a new "safer" room where they would both stay for a while.

An audio log was later recorded by Axel, with him talking about how he decided to take refuge in a small area located in the Spaceflight Terminal (his "home") and that it would increase his chances of encountering rescue before anyone else.

Minutes after Amanda's arrival on Sevastopol, Axel began stalking her in the shadows as she explored the station. When she acquired a Maintenance Jack and began trying to unlock a door in the area, Axel put his gun to her head and began interrogating her. He was initially hostile to Ripley until she guaranteed a spot for Axel on the Torrens, the ship she came to the station on, in exchange for Axel's help in getting to Seegson Communications and contacting the ship.

Whilst heading for Seegson Communications, Amanda and Axel encountered a hostile group of survivors. While the group was distracted arguing with each other about stolen loot, Amanda shut off the floodlights in the room, and together her and Axel sneaked past the others when they went to investigate. After getting past the group, they wandered through several hallways until they found themselves trapped by a two-man lock system.

After unlocking the door to get through, they were suddenly ambushed by another member of the same group who was waiting on the other side. The survivor attacked Axel, and during the scuffle Amanda sneaked up on the survivor and struck him with her Maintenance Jack, stunning the survivor long enough for Axel to recover and shoot him dead. The rest of the group then appeared and gave chase, firing their guns at Axel and Amanda but failing to hit either of them and the two managed to escape.

The two eventually found themselves in a large atrium, where they stopped to recompose themselves. After Axel managed to calm Amanda down, the latter pointed out a mysterious substance dripping on his sleeve. Whilst investigating the substance, Axel was suddenly ambushed from behind by the Drone, which impaled him through the chest. Amanda watched in horror as the creature lifted up the hapless Axel and dragged him through a nearby ventilation shaft, forcing his body through such a tiny area, which shredded Axel and killed him.

"You didn't come here for spook stories? Well you're out of luck, sweetheart, because you've just landed smack into the middle of one."
―Axel, to Amanda (from Alien: Isolation)

When Amanda first encountered Axel, he was unstable, jittery and an aggressive individual. However, after Ripley gained his trust, he became less paranoid and began responding to much of Ripley's comments with a quirky remark or sarcasm which she also returned. He later seemed to care for Ripley as after she saved him from death, he tells her that survival is vital and that what she did was for a good cause.

Despite the attempts on his life by the other survivors, Axel told Ripley that he understood their behavior and didn't condemn them, as they were simply scared; fear had made them more violent to the point where survival is their only goal.

Axel carried a .357 Revolver with a holster for it on his right leg when he encountered Amanda Ripley. He also wore dog tags and had a headset with a built-in flashlight in his "home", which he gave to Ripley to allow them to communicate.

"This is your lucky day."

A sketch of Axel by Mike Tanaka. 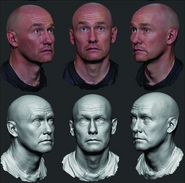 Original sketch of Axel by Tristan Jones.
Add a photo to this gallery

Retrieved from "https://avp.fandom.com/wiki/Axel_Fielding?oldid=262035"
Community content is available under CC-BY-SA unless otherwise noted.