Aspen Beer was a brand of beer manufactured by the Weyland-Yutani Corporation in the 22nd century and brewed in Aspen, Colorado, United States. The beer came in a 6"-tall 440 ml press button can with the Aspen Beer logo on it.

Aspen Beer was consumed by some members of the crew of the USCSS Nostromo in 2122; both when the crew first ate in the mess hall after awakening from hypersleep and as they were eating right before Thomas Kane's Chestburster emerged in the same location, Arthur Dallas drank Aspen Beer while another can was on the mess hall's table. Multiple cans were also in an area of the ship where Dennis Parker and Samuel Brett worked.

While a real world brewery does exist in Aspen, Colorado, called Aspen Brewery Company, it was launched in March 2008 and apparently bears no relation to the Aspen Beer in Alien.[1]

The beer cans are notably one of the few times "The Company"'s name — "Weylan Yutani" (later changed to Weyland-Yutani in Aliens) — is revealed in Alien, being written above the Aspen Beer logo. Phil Rae at one time had an Aspen Beer can as part of his collection.[2] Some production-used Aspen Beer cans have been sold following the film's release — one was acquired by the owner of the website Aliens Archive at the Phillips 1996 "Toys And Dolls" auction,[3] the Prop Store sold one in July 2004 for $749.00 and another was listed on their site in 2009.[4] The most recent one to sell was sold by The Prop Gallery in 2014 as part of their "Alien Week".[5]

Additionally, Propsummit.com (a forum dedicated mainly to props in Ridley Scott's Blade Runner) user "SKIN JOB 66" acquired an unused can label from "one of the guys who worked on the movie" in 2008 and made a limited amount of replica cans, although the cans themselves erroneously used pull tabs.[6]

While Charles de Lauzirika was on the set of Prometheus working on the making-of documentary The Furious Gods, he wore an Aspen Beer shirt.[7]

While Aspen was not featured in the 2014 video game Alien: Isolation (instead replaced with different brands), a sketch of the character Axel done in-universe by Mike Tanaka (whose corpse appears as a sort of Easter egg in the game) released on the latter's in-universe Twitter account depicts Axel drinking Aspen Beer, with the caption "TOO MUCH ASPEN!" in the top right corner.[8]

Brett and some Aspen Beer cans. 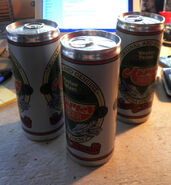 "Too much Aspen".
Add a photo to this gallery

Retrieved from "https://avp.fandom.com/wiki/Aspen_Beer?oldid=242831"
Community content is available under CC-BY-SA unless otherwise noted.