"Intruder on level one. All aliens, please proceed to level one."
―Call (from Alien Resurrection)

Winona Ryder
Annalee Call[4] was an Auton and a mercenary and engineer aboard the smuggling ship the Betty. Call and the crew of the Betty were responsible for delivering several kidnapped civilians to United Systems Military scientists aboard the USM Auriga, and she subsequently became involved in the Xenomorph outbreak and infestation aboard the ship.

Owing to the outlawing of synthetics following their failed uprising, Call kept her nature as an Auton secret. In reality, she acted as a sleeper agent aboard the Betty with the aim of killing Ripley 8 before the Xenomorph Queen gestating inside of her could be harvested for study, although she failed in this mission. She was one of four survivors of the Auriga incident, along with Ripley 8, Dom Vriess and Johner.

Little is known about Call's early life. As an Auton, she would have been designed and manufactured by other machines, although her initial purpose remains unknown. She was one of the few Synthetics to survive the mass recall of all synthetics following the bloody attempted Auton revolution in the 24th century and subsequently went into hiding, posing as a human to avoid detection.

At some point, Call became aware of the USM's project to recreate the Xenomorph species by cloning Ellen Ripley, and subsequently took steps to ensure this project failed; she gained this information before the recall by accessing a USM mainframe, learning of every covert op the government was involved in. She subsequently took it upon herself to destroy the Xenomorphs.[5] Regardless, Call joined the crew of the Betty after discovering their involvement in the scheme, posing as a lowly engineer.

"Well, are you gonna kill me, or what?"
"There's no point, is there? They've taken it out of you."
―Ripley 8 and Call (from Alien Resurrection)

When the Betty docked with the USM Auriga to deliver its cargo of kidnapped civilians to Dr. Wren's science team, Call went aboard the military vessel as a member of the Betty's crew. She later slipped into the secure areas of the ship where Ripley 8 was being held, intending to kill her to prevent Wren and the other scientists extracting the Cloned Queen embryo from inside her. However, she quickly discovered that she was too late, and that the Queen had already been removed from Ripley 8's body, and was breeding. Call was subsequently apprehended by Wren, who confronted the rest of the Betty crew regarding her actions. The confrontation quickly turned violent, with the Betty crew gaining the upper hand and taking Wren prisoner.

Before the situation could progress, the Cloned Xenomorphs escaped from captivity and the USM personnel on board the Auriga either evacuated or were slaughtered, forcing the Betty crew to make for their ship in an attempt to escape. Along the way, the survivors encountered Larry Purvis, one of the civilians that had been delivered to Wren to use as Xenomorphs hosts, and Call insisted they take Purvis with them, hoping to surgically remove the Chestburster inside him later and save his life.

"I should have known. No human being is that humane..."
―'Ripley 8 to Call, after discovering her true nature (from Alien Resurrection)

With the Xenomorphs constantly harassing the group, Wren betrayed the survivors and shot Call with her own zip gun, apparently killing her and causing her to fall into the clutches of a waiting Drone. However, she reappeared minutes later, revealing herself to be an Auton in the process, one of the few remaining androids in existence. With her true nature now revealed, Ripley 8 had Call patch into the Aurigas computer, Father, and set the ship on a collision course with Earth, intending to destroy all of the remaining Xenomorphs in the crash.

The survivors eventually made it to the Betty and fled, although the Newborn also made it aboard the craft at the last moment. Call was cornered by the creature in the Betty's cargo hold, but was saved by Ripley 8, who killed the creature by ejecting it into space through a small hole in the ship's hull. With the Auriga and all of the Xenomorphs destroyed, Call, Vriess, Johner and Ripley 8 landed on Earth near a devastated Paris, finally home but facing an uncertain future.

"Since when were you in charge?"
"Since you were born without balls!"
―Johner and Call (from Alien Resurrection Special Edition)

Call is by far the newest member of the Betty crew, and as such is treated with a mixture of disdain and/or mockery by the rest of the crew. The one exception was Vriess, with whom she was close. In terms of her own personality, Call was by far the most caring and considerate of the Betty crew, and outwardly appeared quite naïve. While this naïvety may in part have been an aspect of her cover persona, it was at least partially based in reality, as she was easily duped by Wren into handing over her sidearm.

It was Call's compassion for mankind that drove her to attempt to disrupt the USM's Xenomorph breeding program in order to safeguard the human race, although to do so she was willing to kill Ripley 8 in cold blood; as a machine, she rationalized this behavior by painting Ripley 8 as an artificial "construct" grown in a lab, and not a true lifeform. Despite being an Auton, Call harbored a belief in God, although, as a machine, she did not believe she would go to the afterlife.[6]

Call had a dark sense of humor at times such as when she pages all aliens aboard the Auriga to go after Dr. Wren in the way someone would call security. Ripley even noted this stating "you have a real mean-streak in you."

Call showed self-disgust for her status as a machine. At one point, when Ripley tends to Call's damage, Call states "look at me, I'm disgusting." She also hated the idea of interfacing with the mainframe of the Auriga because of how disconnected it made her feel. Call's actions made it clear that she preferred being seen as human instead of a machine and that she herself preferred the illusion of humanity over the truth about her nature.

Although she was largely a pacifist by nature, when she had to use a weapon Call preferred to use knives.[7] She carried one such knife concealed about her person, and planned to use to kill Ripley 8 aboard the Auriga. Later, she armed herself with a zip gun, smuggled aboard the Auriga in Vriess' P.T.V..[8]

Actress Winona Ryder, who is a natural blonde, has been dying her hair brunette ever since her role in 1986's Lucas, and she colored her hair black and had it cut short for the role of Call. As she is only 5ft 2 ½ (158.8 cm), Ryder had to wear special platform boots to help her match up to co-star Sigourney Weaver, who at 5ft 11 (180.3 cm) is far taller.[9]

Ryder also suffers from an acute fear of drowning owing to a traumatic near-drowning she endured at the age of 12.[9] This caused problems with the extensive underwater scenes in the film, especially as director Jean-Pierre Jeunet wanted the sequence to be shot entirely with the actors, rather than stunt doubles. Despite her phobia, Ryder completed the filming, although some of the sequences had to be reshot numerous times.[9]

Call about to kill Ripley 8 with her concealed knife.

Call in the Auriga's chapel.

Another image of Call.

Call in one of the Auriga's corridors.

Call jacks herself in.

Call about to cut the Chestbuster out. 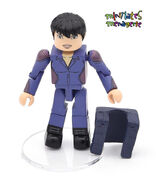 Minimates figure of Call.
Add a photo to this gallery

Retrieved from "https://avp.fandom.com/wiki/Annalee_Call?oldid=260269"
Community content is available under CC-BY-SA unless otherwise noted.