Killed 6 Praetorians after being impregnated by a Facehugger.
Host to the LV-1201 Predalien.

The Ancient Predator is the playable Yautja character in the 2002 video game Aliens versus Predator 2: Primal Hunt.

He arrived on the planet LV-1201, along with his clan, in 1730 in order to hunt game. He encountered a verdant world, full of dangerous prey including a carnivorous, moose-like creature (Buhlagh), a hulking, bipedal reptile capable of disguising itself as part of the terrain (Chameleons), and a wormlike organism which attacked from underground (Tentacle). Quickly, however, the Predator discovered more dangerous prey: Xenomorphs. The Predator followed them to their hive, through ancient Engineer ruins, where he discovered and activated an ancient artifact which had the power to keep Xenomorphs at bay.

Eight months later, the Predators had built a sort of hunting lodge or base camp around the Artifact from which to organize hunts deeper into the hive. The Ancient descended, with some companions, deeper into the hive, in search of the Xenomorph queen. However, an alarm from the facility cut their hunt short. The Predators returned to the facility to find it overrun by Xenomorphs; the artifact had been powered down. The Predator fought through hordes of Xenomorphs, restored power to the artifact, and then attempted to restore power to Pilot-built stasis fields keeping bays of Xenomorph eggs from hatching. While manually repairing one field generator, the Predator was surprised by a Facehugger and both were caught in the newly-activated field.

The Predator awakens five hundred years later when the field is deactivated. He recovers his bio-helmet and makes his way to the now-ruined Artifact Chamber, where Dunya is making off with the Artifact. He pursues her through the infested ruins of the Predator facility. Finally, he tracks her to the Pods. He infiltrates Pod 5, inadvertently allowing hundreds of Xenomorphs inside with him. He hacks into the human systems to learn the location of the Artifact, which he retrieves. He then breaks into a communications room and transmits a signal to his fellow Predators in the Nodus Secundus system, nine weeks away. Immediately after sending the transmission, the Predator laughs to his death when the Xenomorph Chestburster (the Predalien) incubating inside him bursts from his ribcage. The signal was subsequently caught by the Prince and his clan, explaining their appearance on LV-1201. 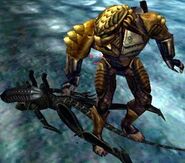 Ancient Predator standing over one of his kills

Ancient Predator and the Facehugger caught in the stasis field.

The Ancient in the hunt.
Add a photo to this gallery

Retrieved from "https://avp.fandom.com/wiki/Ancient_Predator_(LV-1201)?oldid=246159"
Community content is available under CC-BY-SA unless otherwise noted.