An Ancient is a Yautja that is close to 1,000 years old and has survived many Hunts and battles. They are not clan leaders, but loyal and valued advisers to an existing Clan Leader. Considered spiritual leaders, humans often mistake them from Elders. The Ancients made up the Council of Ancients, the governing body of the Yautja species.

An Ancient differs from an Elder in not only age, but status. Though too old to participate in Hunts or battles, Ancients are referred to for counsel and wisdom gathered from their many years of life. Ancient Predators have also been seen with gray dreadlocks as opposed to the jet black ones seen on younger Yautja and more "hair" on their faces. This is likely a result of the old age of Ancient Predators.

It is said that the Ancients taught the young human species how to build Pyramids and Temples, that served as hunting grounds for Young Bloods. In return for this knowledge, Humans became willing host to Xenomorph so that Blooding ritual could commence.

Ancient bio-helmet from Alien vs. Predator

An Ancient Predator in Aliens versus Predator: Extinction 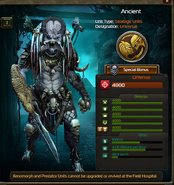 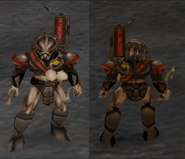 Add a photo to this gallery
Retrieved from "https://avp.fandom.com/wiki/Ancient_(title)?oldid=247904"
Community content is available under CC-BY-SA unless otherwise noted.