PlayStation 3
PlayStation 4
Xbox 360
Xbox One
Microsoft Windows
OS X
Mobile
Aliens vs. Pinball is a 2016 pinball video game developed by Zen Studios and published by Fox Digital Entertainment for the PlayStation 3, PlayStation 4, Xbox 360, Xbox One, PC and mobile devices. It was released on April 26, 2016, as part of Alien Day.

Aliens vs. Pinball includes three distinct tables, based on the film Aliens, the video game Alien: Isolation and the Alien vs. Predator franchise, respectively. Famous characters from the series make an appearance, such as Ellen Ripley and Amanda Ripley, and the game also utilizes a multitude of voiceovers and sound effects taken from the films and video games of the franchise, as well as original voice effects for the AVP and Isolation tables. Andrea Deck and Anthony Howell reprise their roles as the voices of Amanda and Samuels, respectively.[citation needed]

While all three Alien media represented by the tables featured graphic violence and profanity, such content is largely kept to a minimum on the pinball adaptations due to Zen Studios' censorship and family-friendly policies, which are used to make sure all of their pinball tables are consistently rated Everyone 10+. (The standalone Android app is however, rated Teen.) On the Alien vs. Predator table, however, Alien eggs emit green goo when destroyed, and the word "damn" can sometimes be heard during a prompt to launch the ball.

Closeup of the Aliens table.

The Alien vs. Predator table.
Add a photo to this gallery 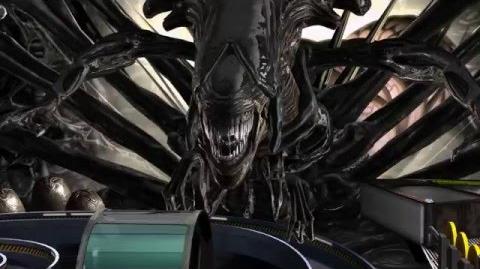 Retrieved from "https://avp.fandom.com/wiki/Aliens_vs._Pinball?oldid=241481"
Community content is available under CC-BY-SA unless otherwise noted.