The Aliens 30th Anniversary Crate is a limited edition Loot Crate merchandise bundle produced by Loot Crate. Containing exclusive merchandise based on the Alien franchise, it was released on April 26, 2016, as part of Alien Day.

Somebody wake up Hicks! It's another glorious day in the Corps and this time, it's war. Aliens (chest) burst onto the scene on July 18th, 1986, quickly becoming a critical and commercial mega-hit.

Loot Crate has teamed up with 20th Century Fox to celebrate all that great stuff with the Aliens 30th Anniversary Crate, a collection of EXCLUSIVE Aliens collectibles and gear valued at over $90!

The Loot Crate additionally features a trapezoidal box with reversible artwork that can be folded into a papercraft model of the APC from Aliens, as well as a contents leaflet designed to look like a top secret communique from Carter Burke. 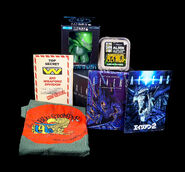 The full contents of the crate.

The reversible APC packaging.
Add a photo to this gallery

Retrieved from "https://avp.fandom.com/wiki/Aliens_30th_Anniversary_Crate?oldid=234735"
Community content is available under CC-BY-SA unless otherwise noted.