Aliens: Terrordome is a mini-comic that was published by Dark Horse Comics in 1992. It was included exclusively with the Queen Face Hugger action figure produced by Kenner Products. The story was written by Dan Jolley, penciled by John Nadeau, inked by Billy Ray Marimon, lettered by Dan Nakrosis, and edited by Dan Thorsland, with cover art by Joe Phillips.

Terrordome was a part of the Aliens: Space Marines series, a number of mini-comics included exclusively with certain toys from Kenner's Aliens and Aliens vs. Predator toy lines. It was the eleventh comic in the series, continuing the story from Aliens: Swarm, and its story was continued in the subsequent comic, Aliens: Ice Storm.

"This should be the last of them. But do not let your guard down. They are silent and deadly!"
―Bishop

The Space Marines set down on the lunar base above Terraform 3 and find the entire installation has been turned into a Hive by the Queen Face Huggers. The squad is ambushed by the creatures, and a fierce firefight ensues. As the smoke settles, the Queen Face Huggers inside the base's dome are wiped out, but Lt. Ripley finds a lone young girl who tearfully tells them her parents have been captured by giant Rhino Aliens and taken to the neighboring dome...

Aliens: Terrordome was never offered for individual sale anywhere and was exclusive to the Queen Face Hugger toy from Kenner with which it was packaged, making it (along with the rest of the Aliens: Space Marines series) among the rarest Aliens comics. 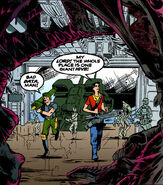 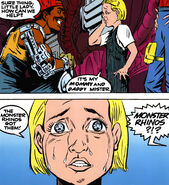 Add a photo to this gallery
Retrieved from "https://avp.fandom.com/wiki/Aliens:_Terrordome?oldid=258427"
Community content is available under CC-BY-SA unless otherwise noted.