Aliens: Stampede is a mini-comic that was published by Dark Horse Comics in 1992. It was included exclusively with the Bull Alien action figure produced by Kenner Products. The story was written by Dan Jolley, pencilled by William Knapp, inked by Robert Campanella, lettered by Dan Nakrosis, and edited by Dan Thorsland, with cover art by Mark A. Nelson.

Stampede was a part of the Aliens: Space Marines series, a number of mini-comics included exclusively with certain toys from Kenner's Aliens and Aliens vs. Predator toy lines. It was the seventh comic in the series, continuing the story from Aliens: Showdown, and its story was continued in the subsequent comic, Aliens: Fireball.

"I don't know about this Rip. I didn't fight my way out of the toughest prison in the galaxy just to buy the farm here"
―Drake

The Space Marines head for a settlement that has failed to respond to warnings of Xenomorph infestation following the Bull Alien attack, expecting trouble. Sure enough, upon arrival they are attacked by a herd of Bull Aliens. They cut through the creatures with flamethrowers, and set off in pursuit of those that flee. They track the Aliens to a nearby ranch, where Bishop's sensors detect more than 50 of the creatures within. With little alternative, Lt. Ripley leads the Space Marines inside.

Aliens: Stampede was never offered for individual sale anywhere and was exclusive to the Bull Alien toy from Kenner with which it was packaged, making it (along with the rest of the Aliens: Space Marines series) among the rarest Aliens comics. 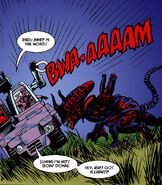 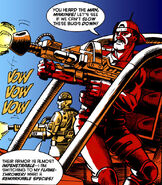 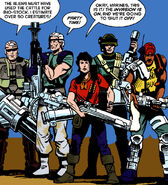 Add a photo to this gallery
Retrieved from "https://avp.fandom.com/wiki/Aliens:_Stampede?oldid=255999"
Community content is available under CC-BY-SA unless otherwise noted.