Aliens: Operation: Rescue is a mini-comic that was published by Dark Horse Comics in 1992. It was included exclusively with the Scorpion Alien action figure produced by Kenner Products. The story was written by Dan Jolley, illustrated by Denis Rodier, lettered by Dan Nakrosis, and edited by Dan Thorsland, with cover art by Mark A. Nelson.

Operation: Rescue was a part of the Aliens: Space Marines series, a number of mini-comics included exclusively with certain toys from Kenner's Aliens and Aliens vs. Predator toy lines. It was the second comic in the series, continuing the story started in Aliens: Desert Storm, and its story was continued in the subsequent comic, Aliens: Hive War.

"Caution! This breed of Alien is one that we have never encountered!"
―Bishop regarding the Scorpion Alien

Bishop and Cpl. Hicks enter a Xenomorph Hive in search of Sgt. Apone, who has been captured and cocooned by the Aliens. They encounter a group of Scorpion Aliens, but quickly dispatch them and locate Apone, cocooned to the wall. After freeing the Sergeant, they group attempt to escape the Hive, but run straight into the Queen.

A reprint of Aliens: Operation: Rescue was included with NECA's updated Scorpion Alien figure. However, other than the Kenner and NECA figures with which it has been packaged, the comic has never been offered for individual sale anywhere, making it (along with the rest of the Aliens: Space Marines series) among the rarest Aliens comics. 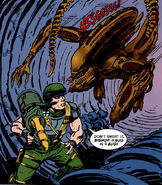 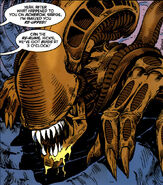 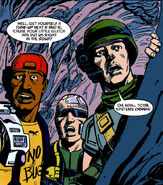 The group encounters the Queen. 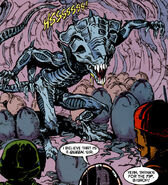 Ditto.
Add a photo to this gallery
Retrieved from "https://avp.fandom.com/wiki/Aliens:_Operation:_Rescue?oldid=255994"
Community content is available under CC-BY-SA unless otherwise noted.