Aliens: Infestation is a 2011 side-scrolling shooter video game developed by Gearbox Software and WayForward Technologies and published by SEGA for the Nintendo DS. The game follows a team of Colonial Marines as they locate and investigate the USS Sulaco following the vessel's disappearance after the events of Alien3.

Following the discovery of the USS Sulaco adrift in space some 18 weeks after events on LV-426, a team of Colonial Marines are dispatched aboard the USS Sephora to investigate. They quickly discover the presence of hostile Union of Progressive Peoples (U.P.P.) soldiers, as well as Xenomorphs that have established a Hive aboard the ship. After encountering and defeating the Xenomorph Queen, the Marines descend to the surface of LV-426 to continue their investigation. There they discover that the U.P.P. are attempting to harvest Xenomorphs for their own use. The Marines eliminate the U.P.P. presence in the area and destroy their satcom.

As the Xenomorphs attack, the squad escapes the area in an APC. However, the APC crashes into the derelict, ending up inside the Pilot's chamber. There the Marines face off against a Jockey-Xenomorph, ultimately defeating it. The continued Xenomorph presence suggests that the Weyland-Yutani Corporation is also involved in events. The Marines travel to a Weyland-Yutani research facility located on the Martian moon Phobos, where they discover a series of experiments being run on the Xenomorphs, including the creation of Gorilla Xenomorphs and a giant tank-like Xenomorph. The Marines, now aware of Sean Davis' plans, return to the Sulaco where they face off against a gigantic Queen (possibly the Queen Mother), with the Sulaco ultimately being destroyed.

The player will control one Marine at the time, and they can freely switch out one marine with another at their own leisure, that is if their marine goes inside a checkpoint room. The player cannot control marines who have not joined the squad beforehand.

Aliens: Infestation was featured on the Feb. 25th episode of the video game documentary series "All Your History Are Belong To Us" on the Machinima YouTube network.

Inside the derelict ship. 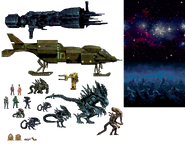 All sprites used in the game.
Add a photo to this gallery

Retrieved from "https://avp.fandom.com/wiki/Aliens:_Infestation?oldid=258588"
Community content is available under CC-BY-SA unless otherwise noted.