Aliens: Hive Wars was a 1998 line of action figures produced by Kenner Products and sold exclusively by Kay Bee Toys. Despite its title, it included Predator figures as well as Alien and Marine characters, each of which was loosely based on those seen in the films Aliens and Predator. Only a single series was released before the toy line was canceled.

The story from the packaging: The Aliens Hive Planet- a new Predator hunting ground for deadly alien xenopods! The heroic Marines, a team of Cyborg-tech warriors, have volunteered to destroy the Alien menace before the entire universe is demolished. It's the galaxy's last chance for survival as the vicious Aliens, ferocious Predators, and fearless Marines clash in the ultimate battle of domination!

The line would be the last of Kenner's Aliens and Predator action figures. A second series was planned to include other unreleased figures originally intended for the earlier Aliens and Predator lines, but poor sales canceled the series. Even so, some unpainted test figures can be found online through collectors. Along with this second series of figures, an Aliens: Hive Wars comic was also made but it was never officially released or colored. 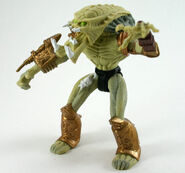 The Heavy Infantry Predator that was scrapped from the previous Predator line, would have been included in the canceled Series 2 of Aliens: Hive Wars. 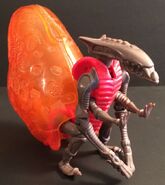 A prototype of the unreleased "Egg Alien" that would have acted as a "portable Alien", being able to fold up inside the Ovomorph shaped sack on its back.

A prototype of the "Dragonfly Alien" which would of had a similar gimmick to the "Egg Alien".

The "Dragonfly Alien" disguised as an Ovomorph. 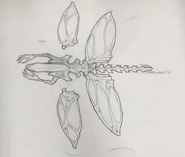 Concept art of the "Dragonfly Alien".

A prototype of the unreleased Smash Mason figure.

A prototype of the unreleased SCUBA Predator.

A prototype of the unreleased female Air Attack Predator.
Add a photo to this gallery

Retrieved from "https://avp.fandom.com/wiki/Aliens:_Hive_Wars?oldid=255287"
Community content is available under CC-BY-SA unless otherwise noted.