Aliens: Resistance
Aliens: Dust to Dust is a four-issue limited comic book series that was first published by Dark Horse Comics from April 2018 to January 2019, with the first issue being released as part of Alien Day. It was also published simultaneously in the digital format via Dark Horse Digital. The story was written and illustrated by Gabriel Hardman, colored by Rain Beredo, lettered by Michael Heisler, and edited by Randy Stradley, with cover art by Hardman. Carlos D'Anda also provided variant cover art for each issue.

Deep within the district colony of Trono on the planet LV-871, a young child named Maxon Cregar awakens to the sound of gunfire. He calls for his mother, Anne Cregar, only to his horror to find a spider-like creature attached to her face. After a short period of time, the creature detaches itself and Maxon's mother awakens, delirious. After hearing an explosion and witnessing two shuttles take off from the colony, the mother tells Maxon to pack his things and get to a nearby port for evacuation. The two leave their apartment to find a corpse in front of them. Anne reaches for the rifle from the body, but suddenly comes face to face with a hulking Xenomorph that emerges from the darkness. Both stand perfectly still as the creature closely inspects the mother, before turning its back on them and taking leave. The two emerge outside of their apartment into the ravaged streets of Trono and get into their car, accidentally running over a Facehugger and splashing a tire with acid blood. As the mother frantically drives to their destination, Maxon looks out the window to see several citizens of Trono being mauled by the creatures. Suddenly, the tire of the car gives way, causing them to crash.

As several Xenomorphs advance towards the vehicle, another car crashes into them, sending the aliens into a retreat. The assailant gets out of the vehicle and introduces himself as Assistant Administrator Waugh, who escorts them through the streets to the port. Though they finally reach the port itself, they are ambushed by a horde of Xenomorphs, supposedly waiting for prey nearby the evacuation site. The three rush to a nearby evac shuttle, barely managing to escape with their lives. Acid Blood within the hull of the ship causes panic, whilst Anne begins doubling over in pain. As a frightened Maxon asks if she is okay, she suddenly convulses and births a Chestburster. In the panic, the creature scurries away and buries itself in a sector of the ship. The captain of the shuttle states that due to the effects of the acid blood, the shuttle will be unable to reach orbit in its condition. However, she has been in contact with the U.S.S Carver and are currently arranging for a transfer with another shuttle sent by the ship. Maxon notices the chestburster's tail and reaches for a pistol in an attempt to kill it. A passenger stops him, before the creature emerges and tears the man's throat before disappearing again.

Suddenly, the shuttle takes a dive and begins approaching the planet's wasteland. The shuttle crashes into a mountain, but the ships emergency airbags prevent any casualties. As the passengers leave the ship one of them introduces herself to Maxon as Sinta and tries to comfort the traumatized child, but he is soon dragged out of the ship by Waugh. The group detonate the shuttle, supposedly killing the Xenomorph inside. After finally establishing communications with the Carver the group see the ship itself come crashing into the surface, ruining their hopes of escape. Waugh, suggests traveling on foot to the nearest terraforming plant in hopes of refuge. Officer De Vore strikes up a conversation with Maxon and asks for his cooperation, Maxon reluctantly agrees, before subsequently collecting an antenna near the ruins of the shuttle. However, Maxon to his horror witnesses that the Xenomorph, reaching maturity, had survived the crash at the expense of an arm, and was pulling free from the ruins. As he takes leave to catch up with the group, De Vore asks Maxon what's wrong, to which he does not reply, looking back as the alien frees itself.

Amidst a large sandstorm, De Vore asks Maxon the whereabouts of the elderly couple and the Engineer that was nearby. After Maxon is unable to reply, De Vore enters the sandstorm to look for them as the captain radios in announcing that they have found shelter in the form of a facility. As time goes by, Maxon is seen sitting down waiting for De Vore's return. He pulls out his mother's id card that reads Anne Cregar/Mother. Maxon cries as he laments the death of his beloved mother, before suddenly encountering the hysterical and bloodied Engineer who yells at him that they have to leave. The armless Xenomorph subsequently emerges and kills the Engineer, and then turns its attention to Maxon. However, the Xenomorph hesitates from attacking the child, and Maxon is suddenly grabbed by De Vore and told to run. The two eventually reach the station and reunite with the rest of the group.

Inside, the group discuss their plan. Waugh announces that they are a 100 meters from the nearest terraforming plant, but the bridge leading to it had been destroyed. After identifying an escape shuttle in the terraforming plant on the other side of a river, the captain comes to the conclusion that it would be best to wait until morning to make their journey to the shuttle. Sinta takes Maxon, still suffering from the aftereffects of an adrenaline rush, to a bunker for him to sleep. Maxon later overhears De Vore talking to the rest of the group about how the Xenomorph may be protecting Maxon due to its DNA reflex coming from his mother, and subsequently suggests that perhaps the group is better off pushing forward without Maxon. Upon hearing this, Maxon walks away, packs a bag and takes the ladder from the facility and onto the planet surface, intending to abandon the survivors. However, he is grabbed and scolded by Waugh. As Waugh proceeds to return to the facility, with the protesting Maxon in hand, he looks up and witnesses a plethora of Xenomorphs on the ceiling.

The survivors flee from the ambushing aliens, with De Vore being killed in the attack. They reach the outside of the facility and are forced to climb the cable of the destroyed bridge to get across for any chance of survival. The captain is forced to give up her handgun to Waugh, and is subsequently killed by the horde before she manages to get on the cable. Waugh hands to gun to Sinta as the three remaining survivors are forced to climb across the cable, the Xenos in hot pursuit. Before a Xenomorph manages to strike Waugh with its tail, Sinta fires several shots at the aliens, their acid blood dripping onto the cable, causing the cable to break with everyone falling into the river below.

Maxon plummets into the river unconscious, near-drowning. However, he is suddenly saved by Waugh, who brings him to

land and reveals himself to be a Synthetic, his torso severed.

Waugh requests Maxon to decapitate him to make mobility more convenient. Maxon complies and eventually reunites with Sinta, Waugh's severed head in his arms. The group enter the terraforming plant through a retinal scan from Waugh and explore the interior. Max recognizes a group of deceased Facehuggers and questions Waugh if he ever knew about this. Sinta accuses Waugh and his superiors of transforming the plants into incubators. Waugh reveals that the government of Trono had signed an agreement with the Weyland-Yutani Corporation that, in exchange for a lifetime of funding, Trono would comply with "bio-storage" activities, resulting in "unintended consequences".

Suddenly, the armless Xenomorph emerges, with Maxon prompting the others to flee, himself believing that the creature will not hurt him. This is proven to be a mistake, however, as the Alien pounces on Maxon who barely misses a Headbite and is only saved from death by Sinta, who throws a large mechanical arm that strikes the creature. The group flee, running up a large flight of stairs in hopes of reaching the escape shuttle. However, they stumble upon a massive horde and are forced into an elevator. When the elevator is revealed to not function, they take the escape hatch and eventually reach the top of the plant. The group soon realize that they are on the wrong tower, and must make a jump to the next tower to reach the shuttle. Maxon goes first and Sinta tosses the head of Waugh to him, later revealing that she wont make it due to the condition of her leg.

Maxon ventures on into the facility and discovers a Xenomorph hive, the cocooned Captain and a Queen that blocks his path to the escape shuttle. However, the armless Xenomorph emerges and attacks the Queen, granting Maxon enough time to board the shuttle, ignite the engines and take off, burning the hive and all of its inhabitants in its wake. To Waugh's protest, Maxon strays from the required trajectory in order to save Sinta and pick her up just before the Xenomorphs reach her, the three together finally escaping the nightmare.

Maxon, Sinta and Waugh are soon rescued, with Maxon and Sinta being reinstated at a space station. Maxon is given temporary refuge with an elderly couple who comfort him. The couple tuck Maxon in bed and tell him that if there is anything he needs "just say so anytime". However, a nightmare forces Maxon to wake up in a fright and cause him to stare out into the empty abyss of space.

#1: The Trono colony on LV-871 is under attack. Emergency evacuations are ordered. Evac shuttles are taking off. All twelve-year-old Maxon and his mom have to do is make it to the spaceport. Except between them and it are... Aliens!

#2: A mother and son bound by a shared terror — separated by an implacable alien force! A spaceship that should carry them away from the fear becomes a deathtrap from which escape seems impossible!

#3: A boy faces threats and decisions that would reduce a grown man to tears. A terrifying coming of age story featuring the most frightening creatures in the galaxy!

#4: Days ago, Maxon was a twelve-year-old boy, concerned with the kinds of things that concern young boys. Then the Aliens came. Now Maxon must depend solely on his wits and his will to survive. It's a hell of a way to grow up.

Aliens: Dust to Dust was collected as a trade paperback and released on April 24, 2019. The collection reuses Gabriel Hardman's cover for issue 1 as the cover artwork.

Aliens: Dust to Dust #1 was released as part of Alien Day 2018, although it actually went on sale on April 25, the day before the event.

Cover to Aliens: Dust to Dust issue 1 by Gabriel Hardman.

Cover to issue 4.
Add a photo to this gallery

Variant cover to issue 4.
Add a photo to this gallery 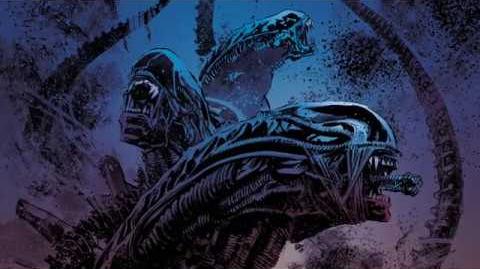 Retrieved from "https://avp.fandom.com/wiki/Aliens:_Dust_to_Dust?oldid=262155"
Community content is available under CC-BY-SA unless otherwise noted.