The first DLC pack, Bug Hunt, became available for download in March 19, 2013. It features three new multiplayer maps called "Broadside", "Mercenary" and "Tribute" that are based on locations seen in the film Aliens, as well as a new cooperative multiplayer mode in which a squad of Colonial Marine players faces increasingly difficult waves of Xenomorph and Weyland-Yutani PMC enemies.[3][2]

The second DLC pack, the Reconnaissance Pack, became available for download on May 7, 2013. It features 3 new Team Deathmatch/Extermination maps called "Grief", "Shipwreck" and "Autopsy", which are based on locations seen in the singleplayer campaign of the game, a new Survivor map called "Off the Grid", located around the iconic derelict ship outside the Weyland-Yutani Origin Facility, as well as new skins, fatalities and heads for each Xenomorph class for additional character customisation.

The third DLC pack, the Movie Map Pack, became available for download on June 11, 2013. As its name suggests, it includes several new multiplayer maps based on locations from the Alien film franchise. These include a new Survivor map called "Nostromo", where Marines defend themselves against Xenomorphs inside the iconic USCSS Nostromo from Alien, a new Escape map called "Exodus" that is situated on the doomed USS Sulaco spacecraft from Aliens, and two new Team Deathmatch and Extermination maps that feature locations from Aliens and Alien3: "Fury 161" takes place in the run-down Fiorina 161 prison facility as seen in Alien3, while "Processor" is set in the heart of the Hive from the Atmosphere Processing Plant in Aliens.

The fourth and final DLC pack was released in July 23, 2013. It features a brand new single-player campaign called Stasis Interrupted and tells the story of what exactly happened to Corporal Hicks during the 17 week gap between the film Aliens and the beginning of the main game. It was developed as a collaboration between Gearbox Software and Darkside Game Studios. The campaign add-on also adds several new trophies/achievements for players to unlock, which were initially revealed via the trophy list for the PlayStation 3 version of the game. Players cannot use weapons from other downloadable content, as they are restricted to the weapons that the level has set up.

Several pre-order bonuses included with certain editions of the game were later released as downloadable content for everyone to purchase.

Includes the bonus materials previously exclusive to the Limited Edition of the game. Adds Ripley's Flamethrower as a new weapon, multiplayer skins for Apone, Hicks, Hudson and Drake and more customization options for Marines in multiplayer.

Includes the bonus materials previously exclusive to the Collector's Edition of the game. Adds two weapons — the XM99A Phased Plasma Pulse Rifle and the G2 Electroshock Grenade — as well as the US Colonial Marines Academy Firing Range level, where player can test their skills in shooting any of the weapons they have unlocked in singleplayer. Notably, the DLC does not include the items from the Limited Edition Pack, even though they were also included with the Collector's Edition of the game.

In addition to the game content, several Xbox Live Avatar items were created to promote the game,[4][5] available for a limited time only.[6] These included props of the Alien Queen, a Facehugger and Eggs, a Chestburster, an Alien Solider, and a Marine motion tracker, as well as various Aliens-themed T-shirts and other clothing items for the player's avatar. 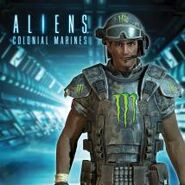 A Marine with all Monster Energy customization options equipped.