In Aliens: Armageddon a Xenomorph plague is unleashed on Earth causing apocalyptic devastation. Mankind’s only hope for survival is to fight their way to a deep space cargo ship and leave the Earth behind. Aliens features a 55 inch LED cabinet, enhanced gun system, eye catching Aliens topper and four frantic levels of non-stop shooting action, with players battling an onslaught of all new alien enemies.

The gameplay is similar to the 2010 Terminator Salvation arcade game, also developed by Play Mechanix, but there is more voice acting in Armageddon and the HUD has changed.[1] Throughout the game, special weapons and grenades are picked up on scripted events. While grenades are used like normal, special weapons are reloadable and are lost during scripted events, being replaced with the assault rifle.

When the research vessel Capella was overrun by Xenomorphs, one of its crew members activated the vessel's self-destruct system moments before being killed by a Xenomorph. The debris of the destroyed Capella rained down on Earth, spreading the Xenomorph plague and causing apocalyptic devastation. Mankind’s only hope for survival is to fight their way to the Ark, a deep space cargo ship, and leave the Earth behind.[2]

There was also a press release around a week before IAAPA which revealed the arcade cabinet (see right) and more details about the game:

"Only you can save earth from the invading extraterrestrials in Raw Thrills’ latest shooter, Aliens Armageddon! Based on the popular Sci-Fi franchise, become a part of the action to help battle invading extraterrestrials after all of Earth’s major cities get wiped off the map. As U.F.O.s descend from the skies, it begins to look as if humanity is doomed. Fortunately, you are there to fight back to try to send the invaders back to the stars.

Aliens Armageddon is a fully-licensed Aliens product with four chapters of intense game play. Epic battles with enormous Xenomorphs will have player’s heart and guns pumping. Cutting-edge graphics and sound will make players feel like they are in the middle of all the action. Plus the force feedback guns with clip reload and alternate fire button add a depth of realism to the shooter.

This game is CoinUp enabled with online leaderboards that will drive players to come back over and over again. The lighted multi-layer Alien topper will draw in players from across the room. The impressive looking deluxe model comes standard with a massive 55” HD LCD display and a 42” mounted gun version is also available to fit any locations space limitations. Both cabinets have lighting synchronized with in-game actions to add another layer of excitement to this game."
―Press release[5]

Concept art of the Marines characters, by Scott Pikulski[6] 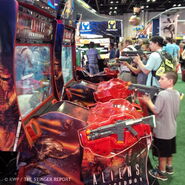 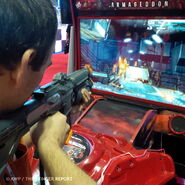 The Alien: Covenant rerelease of the game. 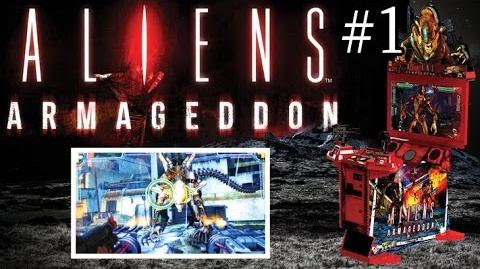 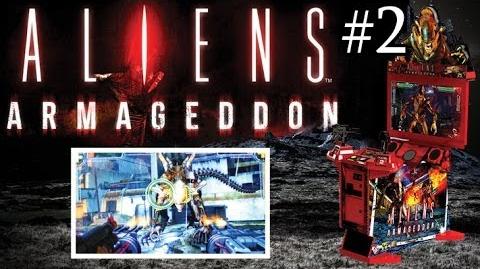 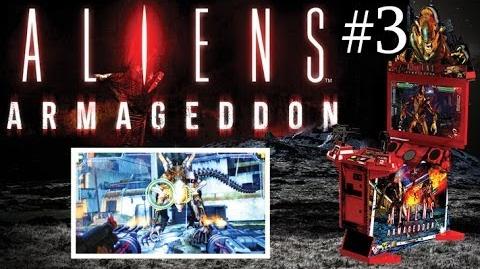 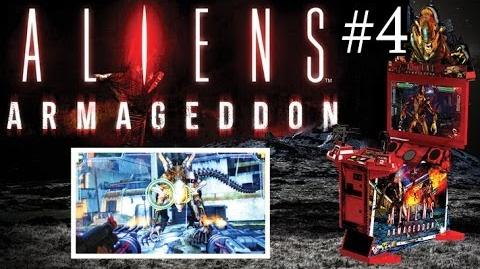 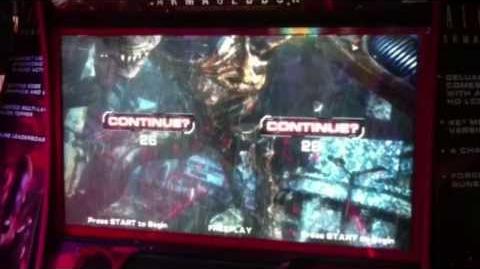 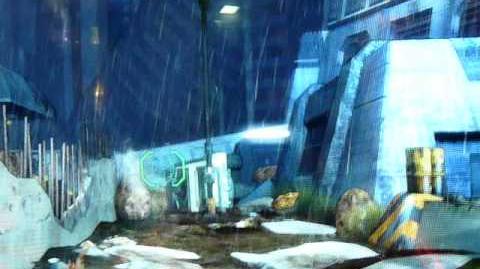 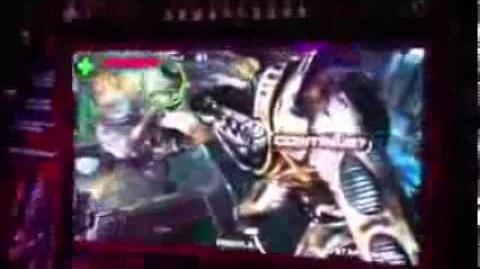