Aliens: Alien 2 is a 1987 side-scrolling shooter video game developed and published by SquareSoft for the MSX, released exclusively in Japan. It is based on the film of the same name. The game was originally also going to be released on the Family Computer Disk System, but this never happened.[1]

The MSX title is one of two video games created to tie into the release of Aliens. Also produced was a Commodore game.

The Japan-only Aliens: Alien 2 was a very different game to the Aliens video game released elsewhere around the globe. Unlike the first-person strategy format of the more widely available game, the Japanese release is a fast-paced side-scrolling shooter in which players take control of Ellen Ripley on a planet infested with Xenomorphs. Armed with only a basic gun at first, players are confronted by Facehuggers that emerge from Xenomorph Eggs. After dispatching a Facehugger, the Egg may be shot to reveal an item, including hand grenades, stronger guns or wing items that enable Ripley to jump higher and further. As well as various castes of Xenomorph, the planet is also infested with snakes. After clearing the surface level, Ripley enters a complex where the first boss, a giant, full-grown Xenomorph resides. The following levels take place within the complex. 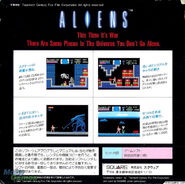 Retrieved from "https://avp.fandom.com/wiki/Aliens:_Alien_2?oldid=241482"
Community content is available under CC-BY-SA unless otherwise noted.