SNES
Alien vs Predator, known as Aliens vs Predator in Japan, is a 1993 side-scrolling fighting video game developed by Jorudan Co. and published by Activision for the Super Nintendo Entertainment System. It was the first Alien vs. Predator game ever made.

The story takes place on the planet Vega 4 where workers are digging a subway tunnel when they accidentally uncover Alien Eggs. The Aliens quickly overcome the colonists, forcing them to send a distress call to the Earth-based authorities; however, the distress call is received and understood by a passing Predator ship. The Predators had been searching for big game and were headed to Vega 4 to hunt humans, but now they would face a greater challenge - the Aliens. The Predators determine to wipe out the infestation on the planet. Once this is accomplished, the Predators head out to the source of the Aliens. The main Predator battles the Queen and emerges victorious. Their ship leaves Vega 4 with the universe forever in their debt, and the Predators looking forward to meeting more of these creatures.

The game is a side-scrolling beat 'em up where the player takes on the role of the Predator as they move through levels fighting Alien Drones, Chestbursters and Facehuggers. The game has six levels (although some are split into two or three separate points) and has a boss Alien for each level. The Predators begin their hunt in the city and after clearing the streets and sewers of Aliens, they head to the forest and then into a hive at the base of the forest's waterfall. Eventually the only remaining Aliens are at the spaceport where the Predators continue to hunt them. It is soon discovered that the Aliens came from the Orion Nebula, so the Predators fly an Alien-infested spaceship to the Orion Nebula seeking a richer hunting ground. The spaceship is the longest level, but once it's cleared, the Predators arrive and after clearing the surface head into the Hive for the final showdown with the Alien Queen.

The sixth and final boss, the Alien Queen. 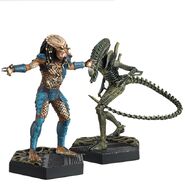 Eaglemoss Collections figurines of a Predator and Warrior Xeno from the game.
Add a photo to this gallery

Retrieved from "https://avp.fandom.com/wiki/Alien_vs_Predator_(1993_video_game)?oldid=255692"
Community content is available under CC-BY-SA unless otherwise noted.