Alien vs Predator: The Last of His Clan

Alien vs Predator: The Last of His Clan

Game Boy
Alien vs Predator: The Last of His Clan, known as Alien vs. Predator in Japan, is a 1993 side-scrolling action video game developed by ASK Kodansha and published by Activision for the Game Boy.

You are the Predator! You're the last of a Clan that's been decimated by an overwhelming number of savage aliens. Their numbers and ferocity can only mean one thing--they're defending an Alien Queen!

Defend your honor! Defend your clan's honor! Hunt the Queen and take revenge. Use your awesome Predator weaponry: laser cannons, wristblades, cutting disk, bombs and cloaking device as you fight your way through hordes of vicious Alien warriors, face-huggers and chest-bursters on 7 maze-like levels in your quest for the ultimate trophy -- the Alien Queen!

Following the opening credits screen, images and lines of narrative exposition are revealed row by row:

Background: Originally settled by Human colonists, for the purpose of mining the rich ore deposits and shipping them back to the resource-depleted Earth.

Recent Events: A Predator drone ship placed Alien eggs onto the planet, which hatched and produced a fine crop of Alien prey. The Human population was eradicated in the process. A Predator hunting party then arrived to hunt the Aliens, but the number of Aliens was underestimated and all the Predators were, in turn, wiped out.

Theory: An Alien Queen is present, which would explain the larger-than-anticipated population of Aliens.

Mission: It is now up to you, the last of your clan, to regain the Predators' honor. And your own.

The Last of His Clan is a side-scrolling, action platformer in which the player navigates a lone Predator through seven stages on a path toward the Alien Queen.

To progress through each stage, the Predator must locate bombs to destroy obstacles as well as keys to open doors at the end of the stage, all while navigating multi-level, maze-like terrain with enemies on all sides.

Xenomorphs, Chestbursters and Facehuggers threaten the Predator throughout, and the player will use an arsenal of laser cannons, wristblades, a cutting disk, bombs and a cloaking device to defeat these enemies, who become harder to strike down with each passing stage. 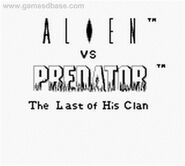 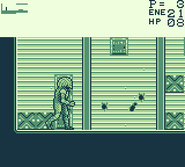 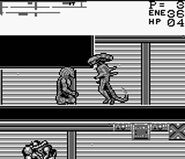 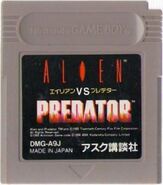