Since the first comic story, numerous video games, novels and other comics have been produced. The first cinematic crossover between the two species actually took place in the 1990 film Predator 2, in which a Xenomorph skull is briefly glimpsed inside a Yautja trophy cabinet, although the creatures did not formally meet on the big screen until Alien vs. Predator in 2004. A common element appearing in the AVP franchise is the creature known as the Predalien, acting as a literal crossover between the two titular species.

Unlike the well-defined Alien and Predator franchises, the exact title of the Alien vs. Predator series has taken many slightly different forms over the course of its history, chiefly regarding the pluralization (or not) of "Alien" in the title. The current accepted format is Alien vs. Predator, denoting a crossover between the franchises spawned by the 1979 film Alien and the 1987 film Predator. However, the original title of the AVP concept, as created by Dark Horse Comics in 1989, was Aliens vs. Predator, stemming from the fact the series began as a crossover involving the company's Aliens comics line. This plural format remains by far the most commonly used with regards to the AVP comics, and is correct when referring to the comic line specifically.

Another point of contention is the exact form of the conjunction ("vs.") in the middle of the title. The forms "vs." and "versus" have both been used, as well as a simple slash ("/") in some cases. Originally, the first comics that launched the franchise used the form "vs.". Between mid-1995 and 1998, the expanded "versus" was primarily used, before the series reverted to the shortened "vs." in 1999 — many of the comics that originally used the longer form have since had their titles altered to use the shorter equivalent. By contrast, the use of a slash has been minimal, only appearing on two individual AVP comics. The use of a slash is, however, far more prevalent in the crossover comics, specifically those that introduce the Aliens to other characters (e.g. Batman/Aliens).

The two feature films have exclusively used "vs." in their titles, while video games have also primarily used the shortened version, with the notable exception of four games released between 1999 and 2003, which opted for the expanded "versus" form.

A group of scientists discover an ancient pyramid buried beneath the ice on an Antarctic island and launch an expedition to investigate, but are unaware the structure is used as a breeding ground for deadly alien creatures constructed by the Predators millennia ago for use in their hunts. The scientists and their mercenary protectors soon find themselves trapped in the middle of a war between the two extraterrestrial races and must fight to escape alive.

A deadly Predator-Alien creature spawned during events in Antarctica escapes into the small American town of Gunnison, Colorado and begins creating an army of Aliens. The Predators dispatch a ruthless hunter to clean up the infestation, leaving the town's unfortunate inhabitants caught in the crossfire.

Colin and Greg Strause, the directors of Aliens vs. Predator: Requiem, hoped to develop Aliens vs. Predator 3 during the production of their sequel. Unlike the first two Alien vs. Predator movies, the directors planned to set the third film in a similar future time period to the Alien series.[1] A spec script for a third film was also written by Liam O'Donnell. In 2008, according to the horror news-website ShockTillYouDrop, "An anonymous source over at 20th Century Fox got in touch with us over the weekend to relay the news another Aliens vs. Predator sequel is a 'certainty' at this point. If you recall, the brothers Strause — who helmed the Christmas release Aliens vs. Predator: Requiem — stated Fox was going to take a 'wait-and-see' approach to a third chapter, furthermore, that the story would have to continue in space."[2][3] However, on September 21, 2008, Collider published an exclusive interview with John Davis (the producer of both AVP films) in which he stated, "I think we've logically done what we could've done with the two AVP movies. But I think there's something to go back to with Predator."[4]

In 2015, having worked on the special effects of Aliens vs. Predator: Requiem, make-up artist David Woodruff (son of Tom Woodruff, Jr., who has worked on both the Alien and Alien vs. Predator franchises) participated in an interview with TheTerminatorFans. When asked about the situation of a third chapter in the AVP trilogy, he stated, "I haven't heard anything about a 3rd installment, not even rumors. This Neill Blomkamp project is the first possibility I've seen or heard of another Alien film and I'm all about it. I know the guys at Amalgamated Dynamics are pushing for something like this too. It's time."[5]

In 2015, during the London Film and Comic Con, Sigourney Weaver stated that one of the reasons she asked to have Ripley killed in Alien3 was because she knew that Fox were moving forward with Alien vs. Predator at that time.[6] Peter Briggs (who wrote an unproduced script for an Alien vs. Predator film in the 1990s) responded by praising all films in the franchise and pointing out that the AVP films were more successful than Weaver's last two Alien-movies, and noting that "There's a terrific Alien vs. Predator movie still to be made by someone. It just hasn't happened yet."[7] In mid-2018, Shane Black, director of The Predator, tweeted his belief that a third Alien vs. Predator could still happen.[8]

Alien vs. Predator franchise novels have included both novelizations (of films and comic books) and original stories.

There have also been numerous video games based on the series, some of which have been adaptations of the films.

Theatrical poster for Alien vs. Predator. 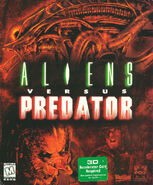 The cover of the 1999 game Aliens versus Predator

The cover of the 2001 sequel Aliens versus Predator 2

The cover of the 2002 expansion pack Aliens versus Predator 2: Primal Hunt 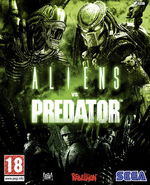 The cover of the 2010 sequel Aliens vs. Predator

Promotional art for the 2003 game Aliens versus Predator: Extinction