The book features a wealth of conceptual and development artwork and materials, including Ridley Scott storyboards, script pages, H. R. Giger's concept artwork, sketches and construction blueprints for the USCSS Nostromo, costume designs by Mœbius, exclusive behind the scenes photographs, and reproductions of in-universe documents and items.

In 2019, it was announced that the book would be republished to celebrate the 40th anniversary of Alien, and that this new edition would be expanded with additional content examining Ridley Scott's two prequel films, Prometheus and Alien: Covenant.[3] According to author Ian Nathan, "I've added an entirely new chapter on the prequels, including my own experiences on set and relating them back to the original Alien in its 40th year. We've also got a new intro from Lambert [(Veronica Cartwright)]."[3]

In space, no one can hear you scream.

For over thirty years, audiences have been simultaneously captivated and appalled as the spaceship Nostromo is invaded and its crew stalked by a terrifying parasitic creature. From the gore of the infant alien bursting from Kane's chest to the mounting claustrophobia as Ripley discovers the monster has followed her into the escape shuttle, Alien is a chilling masterpiece.

Now, Alien Vault opens a portal into the making of this legendary film, tracing its path from embryonic concept to fully fledged box office phenomenon.

Featured herein are director Ridley Scott's own annotated storyboards, Polaroids and script pages; the elegant but disturbing concept artwork of H.R. Giger; sketches and construction blueprints for the Nostromo; costume designs by Mœbius; a treasure trove of never-before-seen photographs of the cast and crew; and ten meticulously reproduced artifacts, enclosed in vellum envelopes, for readers to remove and examine more closely.

Fully authorized and illustrated throughout, Alien Vault is the ultimate tribute to a movie that changed cinema forever.

The book offers an exhaustive and intimate look at the creation of the iconic original film Alien, from the earliest days as a rough outline created by Dan O'Bannon through its development and filming to its release in 1979.

The book contains several includes reproductions of in-universe documents and items, including:

The contents of the book.

The USCSS Nostromo blueprint.
Add a photo to this gallery 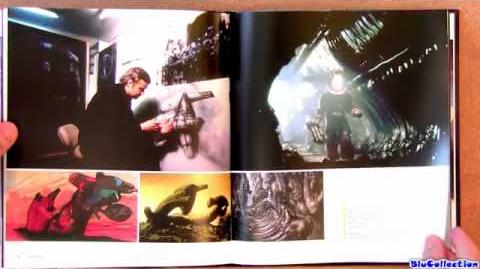 Retrieved from "https://avp.fandom.com/wiki/Alien_Vault?oldid=242678"
Community content is available under CC-BY-SA unless otherwise noted.