Alien Trilogy is a 1996 first-person shooter video game developed by Probe Entertainment, published by Acclaim Entertainment and distributed by Fox Interactive for the PlayStation, SEGA Saturn and PC. The game is loosely based on the first three films in the Alien franchise: Alien, Aliens and Alien3. The console versions featured only a singleplayer campaign, but the version shipped for home PCs additionally included a networked deathmatch multiplayer mode.

Players play as Lt. Ellen Ripley (in a "modified" version of her Alien3 appearance) as she and a team of Marines set down on LV-426 to investigate the colony located there. Soon after touching down, most of the team is killed — only Ripley and Bishop survive. Ripley is then forced to fight her way through swarms of Xenomorph and combat androids before confronting and killing the Queen. After the colony is secured Ripley travels to a prison facility where she encounters Weyland-Yutani soldiers, who have been sent to eliminate her. After fighting through the soldiers, along with more androids and Runner Xenomorphs, Ripley fights and kills another Queen. With the prison now cleansed, Ripley finally heads back to LV-426 and enters the derelict ship, killing a third and final Queen there.

The game ends with Ripley and Bishop escaping from the planet in a dropship. However, as they leave, a shuttlecraft similar to the Narcissus is seen entering orbit. After Ripley enters hypersleep for the trip home, it is revealed that the crew of the shuttle (presumably another team sent by Weyland-Yutani) have been attacked by Facehuggers, and a Xenomorph emerges from the shadows of the craft.

The gameplay and player interface in Alien Trilogy are largely similar to that of seminal first-person shooter DOOM; ironically, assets from the game would later be incorporated into third-party total conversion mods for DOOM. The most obvious alteration to the player's HUD is the addition of a motion-tracking radar, inspired by the motion detectors seen in Aliens, in the bottom right corner of the screen. Aside from occasional CGI cutscenes, the game's plot is told through text-based mission briefings that guide the player through an expanded, action-oriented story, drawing upon the settings and characters of the then-trilogy rather than following the specific plots of the films themselves. The game features many of the Xenomorphs seen in the Alien film series, including Facehuggers, Chestbursters, adult Aliens, Runners and Queens. It also features several weapons taken from the films, including the Pulse Rifle and Smartgun from Aliens, along with other equipment, such as a shoulder lamp, which can be used to illuminate dark areas. The campaign consists of 30 levels plus 3 Queen Alien boss fights.

In the game, when Ripley is killed, a cutscene will initiate. The varying sequences are:

The player in combat with an Alien

The player being subdued by a Facehugger 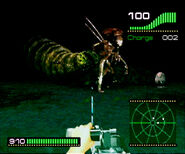 The player fighting a Queen

Retrieved from "https://avp.fandom.com/wiki/Alien_Trilogy_(video_game)?oldid=245143"
Community content is available under CC-BY-SA unless otherwise noted.