Note: Information is based on the version of Alien DS downloadable here where the health and ammo bars are next to each other and the map is inside a gray grid.

As a first-person shooter, the gameplay of Alien DS is fundamentally similar to that of its peers, focusing on combat in a 3D environment that is viewed almost entirely from a character's eye view. The first-person perceptive is viewed on the top screen. The bottom screen features a motion tracker which also acts as a map. The motion tracker will only detect moving enemies and will emit a beeping sound when one is detected. The beeping will begin to play faster as an enemy gets closer. The motion tracker/map is made up of squares with dark blue squares representing the ground and light blue squares representing the walls. The player is represented with a flashing blue square and enemies are represented with a flashing red square. The top left of the bottom screen displays the player character's health and the top right displays the amount of ammo remaining in the player character's weapon's magazine. When using Stylus Controls, the bottom is used to look left and right and, by pressing the ammo icon, to reload the rifle.

The player character is equipped with an automatic rifle which has unlimited ammo. However, the player still has to reload with the Y button in Default Controls, by pressing the ammo icon with the stylus in Stylus Controls or by firing all of the ammo in the magazine in Stylus Controls, at which point the gun will be automatically reloaded. The A button in Default Controls or the L and R in Stylus Controls are used to fire the weapon. The amount of ammo remaining in the weapon's magazine is displayed on the top right of the bottom screen.

The enemies in the game are Xenomorph Drones which will attack the player character with their claws. When hit by a Drone, the top screen will flash red. Drones can take almost an entire magazine to kill and will occasionally spawn behind the player. Drones are as fast, if not faster, than the player character and can also crawl on the ceiling. However, as you can not look up, firing the rifle in the direction of a Drone crawling on the ceiling will still hurt them, even though your weapon is not aiming at them.

The game can also be paused at any time by pressing the "START" button. However, the only indications given that the game has actually stopped is that the motion tracker will stop pulsating, enemies will freeze and none of the controls (except for the "START" button which will unpause the game) will work. Pressing the "SELECT" button will reset the game, sending you back to what would be considered the main menu. However, this will only work in-game.

The goal of the first level is to find a blue card which is used to open a locked door somewhere else in the level.

Overall, the gameplay is somewhat similar to Alien Trilogy.

You play as a human (possibly a Colonial Marine as you use a green automatic rifle and a motion tracker) inside some kind of facility infested with Xenomorph Drones. Armed with an automatic rifle the player character makes their way through the facility. The player eventually finds a blue card, which they use to open a locked door somewhere else in the facility.

In-game image from the version with the two bars next to each other and the map is not inside a gray grid.

In-game image from the version where the two bars are on top of each other. 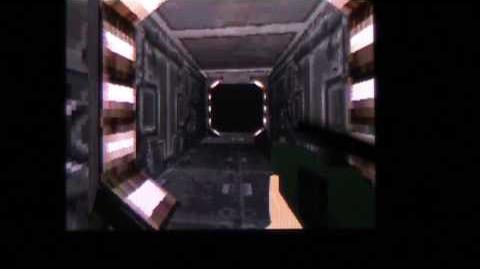 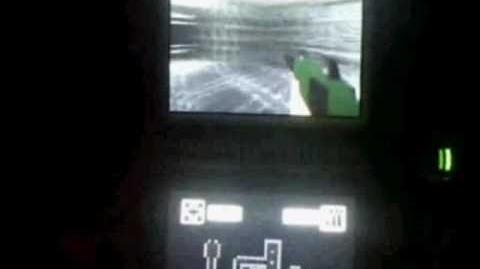 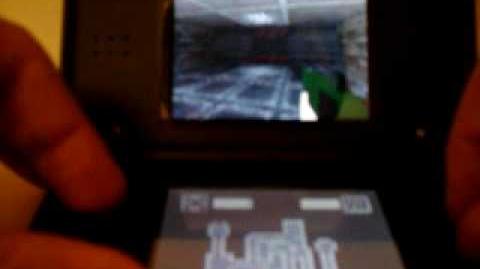