Alien Resurrection
Alien3 is a 1992 novelization of the film of the same name, written by Alan Dean Foster and published by Warner Books.

Here, even the wind screams. Abandoned hulks of machinery rust in the colorless landscape. Dark, oily seas beat against a jagged black shore. And the remnants of a reentry space vehicle crash into the rough waves.

In it sleeps Ripley, a woman who has battled the enemy twice. It killed her whole crew the first time. The second time, it slaughtered a spaceload of death-dealing Marines. Now, on this prison planet that houses only a horde of defiant, captive men, she will have to fight the ultimate alien horror one more time.

Before it rips apart a whole world...

Differences from the Film

The changes made to the Special Edition of Alien3 are also found in the novelization, including Clemens walking alone on the beach and witnessing the EEV crash, the use of oxen to recover the downed pod, one such creature subsequently becoming host for the Dragon, the prisoners successfully trapping the Xenomorph in a waste storage tank before a deranged Golic releases it, the numerous additional lines of dialogue throughout and Ripley falling to her death without the Chestburster emerging from her. Other notable differences include:

To coincide with the novel's original publication, an audiobook version read by actor Lance Henriksen (who played Bishop in Aliens and Michael Bishop in Alien3) was produced by Dove Audio. Owing to the runtime limitations of the cassette tape format on which it was released, the novel was heavily abridged so that it would fit onto just two audio cassettes. The audiobook runs for 2 hours and 59 minutes. It was re-released digitally by Phoenix Books on August 13, 2009.

In 2015, Audible Studios produced a new unabridged audiobook of the novelization, read by actor Peter Guinness (who played Gregor in Alien3). The new full-length version audiobook runs for 7 hours and 29 minutes and was released on December 10, 2015, alongside similar audiobooks of Alien (also read by Guinness), Aliens and Alien Resurrection. 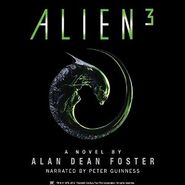