Alien3 is a 1993 side-scrolling shooter video game developed by Probe Software and published by LJN for the Super Nintendo Entertainment System. It is based on the film of the same name.

The SNES title is just one of four video games created to tie into the release of Alien3. Also produced were a Master System/Mega Drive game, a Game Boy game and a Nintendo Entertainment System game. Despite the fact all four were released under the title Alien3, gameplay actually varies quite substantially across the four titles.

Alien3 for the Super Nintendo is very different from the Alien3 adaptations for other systems. The game consists of six stages, and in each, you are given a series of missions to complete that include rescuing prisoners; repairing pipes, fuses, and junction boxes; welding doors shut; and destroying Xenomorph Eggs, as well as the Xenomorph Queen. Once you have accomplished all missions in a stage, you move on to the next stage where you will receive new mission objectives. Missions are outlined via a terminal, and a series of blueprints help you navigate your way through the complex.

Making your job difficult are several types of Xenomorph, which can be killed using Pulse Rifles, grenade launchers and flamethrowers (which comes in three variants). Med-kits can be picked up that will increase your health. 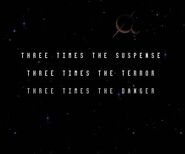 The tagline of the flim.

Back of the cover box.

A Facehugger attaching to Ripley.

An ad for the game also featuring the Terminator 2: Judgment Day and Predator 2 games.

The Alien3: Terminal Addiction ad in Aliens magazine.
Add a photo to this gallery

Retrieved from "https://avp.fandom.com/wiki/Alien_3_(1993_SNES_game)?oldid=242049"
Community content is available under CC-BY-SA unless otherwise noted.