The gameplay of the various Alien3 video games varies from platform to platform. The original 1992 game is a side-scrolling action game with large maze-like levels. In each level, you have to rescue all the trapped prisoners and then make your way to the exit, all while surviving multiple Xenomorph attacks.

The plot is basically the same as the film, with major differences. Ripley arrived at Fiorina "Fury" 161, and she finds the planet is infested by Xenomorph Runners. She is equipped with Colonial Marine equipment to defend herself while rescuing prisoners that are captured by the Aliens.

Back cover of the Master System version 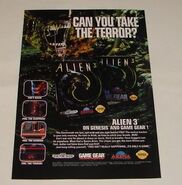 Retrieved from "https://avp.fandom.com/wiki/Alien_3_(1992_video_game)?oldid=255691"
Community content is available under CC-BY-SA unless otherwise noted.