Alien
Alien 2: On Earth (Alien 2: Sulla Terra), also known as Alien Terror and Strangers, is a 1980 science fiction film written and directed by Ciro Ippolito. Co-produced by the United States of America and Italy, it is a low-budget, unofficial and unauthorized sequel to the 1979 film Alien, although the plot has little to no connection to the original film. It follows a group of friends as they go caving together, only to come into contact with a voracious alien creature that gestates inside a living human host, unwittingly brought to Earth by a doomed human spacecraft.

As an unauthorized sequel, 20th Century Studios had nothing whatsoever to do with the film's production and it is not considered a part of the official franchise. In fact, Fox attempted to sue director Ippolito $10,000,000 for using "Alien" in the film's title, but a British lawsuit pointed out that there was already a novel from the 1930s called Alien, and thus the case was dismissed. The concept of making unofficial sequels to mainstream theatrical productions was somewhat common in Italy during the 1970s and 1980s. Perhaps the most notable example of this trend is Zombi 2 (known variously as Zombie or Zombie Flesh Eaters internationally), an unofficial sequel to George A. Romero's Dawn of the Dead that went on to find its own success and create a franchise of films.

As the world awaits the return of a crew of astronauts on a deep space mission, a young woman named Thelma Joyce appears on a television talk show to discuss caves. Soon after her interview begins, Thelma has a horrible psychic vision. After the spacecraft returns to Earth with its occupants missing, a girl on a beach discovers a weird, blue, pulsating rock. Soon after the discovery, her mother finds the girl dead, having her face ripped off.

Some time alter, Thelma and her husband Roy meet up with their friends at a bowling alley. After a short gambling session, they leave to go cave climbing in a cave complex nearby. On the way to the caves, the group stops at a roadside café to buy food and change into their caving gear. Thelma's friend Burt discovers a blue rock. The group can't figure out what type of rock it is, and Burt puts it in his pack to take with them. The group finally arrives at the cave, and quickly rappels to the bottom to set up camp for the night. During the descent, Burt drops the rock. As the group turns in for the night, Thelma tells Roy that she feels that something horrible is about to happen, but Roy calms her down.

The following day, Thelma's friend Jill rappels into a lower section of the cave by herself, where she discovers the blue rock that Burt dropped. Before she can touch it, the rock opens up and a creature attacks her face. Thelma psychically senses the attack and panics. After Roy again calms her down, he elects to go and search for Jill.

Roy rappels down into the hole and finds Jill, alive and apparently unharmed but unconscious. She is hoisted back up to the rest of the group and set aside by herself, still unconscious. While the rest of the group group is taking pictures of the many rock formations, a creature erupts from Jill's left eyeball and attacks Burt, dragging him upside down before beheading him with its tail.

The infant alien quickly grows into a mature shape-shifting creature and begins slaughtering the group of friends one by one, multiplying in number with each kill. Only Thelma and Roy manage to outrun the aliens and escape the caves. They jump into their car and speed towards the city to find help. Along the way, they discover a police car, but no police officers are in sight. They stop at the roadside café again, but there is nobody there. Roy tries to call for help on a payphone, but no operator is available. They get back into the car and continue towards the city.

Thelma and Roy finally arrive, but find the city is likewise deserted. They head to the bowling alley, and Ray is suddenly killed by an alien waiting there. The creature chases Thelma through the bowling alley, until she manages to bludgeon it and make her escape. Outside, Thelma runs through the empty city streets, calling for help but getting no answer. She finally stops yelling and sits down at an intersection, despondent, as text on screen warns the audience, "Now it can hit you too!"

Reviews were generally favorable regarding the film's splatter scenes, the location and the tension, but the content drew a mixed to negative response from critics. Currently, the film holds a 4/10 on IMDb. Adam Tyner of DVD talk wrote, "James Cameron once summed up his follow-up to Alien as 'forty miles of bad road'. Alien 2, meanwhile, is eighty-four miles of bad, period."

The recent Blu-ray release of the film, however, has received more positive reviews from critics and fans alike. Tom Landy of High-Def Digest.com gave the film 3 stars out of 5 and wrote, "It's tough to outright recommend this one to the masses, but for fans of the film or collectors of oddball cult curiosities then this Blu-ray is the definitive disc of Alien 2: on Earth to own."

Alien 2: On Earth has had a somewhat confusing release history. As is fairly common with Italian movies from the period, the original title has been altered, twisted, or sometimes completely changed multiple times since the film's release, often making it hard to find.

On March 22, 2011, Midnight Legacy re-released the English-dubbed version of the film on DVD and Blu-ray in the United States under its original title, Alien 2: On Earth. The re-release includes fully remastered picture and audio. This version of the film is longer than any other version, and includes deleted scenes and trailers.

The Alien Terror title card. The number "2" was sloppily covered in post-preduction.

The egg in the film.

Burth see a button part of the alien.

Burth and Maurine are infected.

An Alien in the Cliff's body.

A Faceburster erupts from Cliff's skull.

Thelma watches as a Faceburster is about to attack Roy.

The Alien's POV when it is in Roy's body. 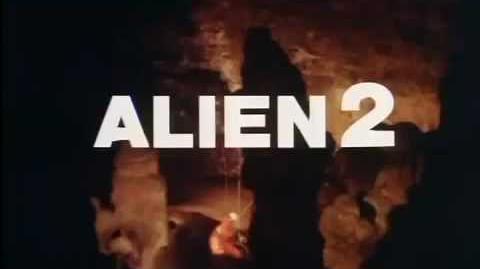