Alien: The Weyland-Yutani Report is a 2014 fictional technical guide to the species known as Xenomorph XX121 and its historical interactions with mankind, written by S. D. Perry and published by Insight Editions. The book was previewed at New York Comic-Con 2013.[3] It was released on October 30, 2014 in France[1] and November 14, 2014 in Spain,[4] but did not see an English-language release until May 2015,[2] and even then only as a special Collector's Edition. A cheaper standard English version was published on April 26, 2016,[5] as part of Alien Day.

The book is a fictional overview of mankind's interaction with the Xenomorph as portrayed in the films of the Alien franchise, and also covers the events of Prometheus. It helps to build upon the details of the film series, expanding on the characters and events shown therein, and includes numerous digital renderings of the Xenomorph, as well as recreations of in-universe artifacts and documents.

Alien: The Weyland-Yutani Report utilizes exclusive illustrations and over thirty-five years of Alien movie concept art and film stills to explore the nature of the Xenomorph in unparalleled detail. Told from the point of view of the nefarious Weyland-Yutani Corporation, the book features extensive information on the characters, locations, vehicles and weapons from the movies, along with an in-depth breakdown of the Xenomorph's formidable abilities. Covering all aspects of this hugely popular saga's history, Alien: The Weyland-Yutani Report is the ultimate book for Xenomorph fans.

The book is written in the form of an in-universe report published by the Weyland-Yutani Corporation, and primarily provides detailed information on the life-cycle of the Xenomorph and an overview of historical encounters with the organism, as seen in the films of the Alien franchise. Additionally, the book features a host of other information on the world of Alien, including insights into the history of the universe and, in particular, Weyland-Yutani, breakdowns of the weapons and equipment seen in the series, and additional backstory on the characters and events of the films. The book focuses on the Alien films and Prometheus — the events of the Alien vs. Predator franchise are totally ignored — but also makes oblique references to the novels Alien: Out of the Shadows and Alien: River of Pain, as well as the video game Alien: Isolation.

The book contains many specially-commissioned illustrations, with over 30 original digital renderings of the Xenomorph and its various forms by expert Markus Pansegrau, along with ten technical illustrations by Alien tech expert John R. Mullaney, including cutaways of the dropship, APC, and uniquely detailed artwork of the Nostromo and Sulaco, as well as iconic weapons such as the Pulse Rifle and Smartgun.[6] Alongside these images, the book includes reproductions of in-universe documents and items, including:

The report draws on over thirty years' worth of Alien movie concept art, production design art, film stills and other visual assets, and for the first time directly links the events of Prometheus with the Alien films.[6]

The book was first released in France in October 2014 and Spain in November 2014, but did not see a trade publication in English until April 26, 2016,[5] as part of the Alien Day promotional event.

As well as the standard edition, the book was also published as a deluxe Collectors' Edition, featuring numerous additional insert items and an exclusive sculpted slipcase created by renowned collectibles sculptor Patrick Pigott and colored by ex-Industrial Light & Magic artist Don Bies.[6] The Collectors' Edition was released through Sideshow Collectibles in May 2015, almost a year before the standard English version.

The exclusive inserts and removable items packaged with the Collectors' Edition include:

The book was first previewed at New York Comic-Con 2013. At booth #1134 during the event, an approximately 4"x 6" promotional card was given out, giving a summary of the book's content on the rear.[7] The card also contained additional details on the book, including the publisher and number of pages.[7] 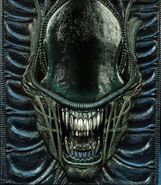 The front of the sculpted slipcase included with the Collector's Edition. 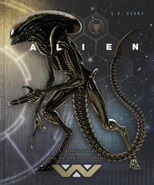 Cover to the French standard edition of the book.

The rear of the promo card with a description of the book.

Retrieved from "https://avp.fandom.com/wiki/Alien:_The_Weyland-Yutani_Report?oldid=251202"
Community content is available under CC-BY-SA unless otherwise noted.