"One-day operation. We pick up their trail at the chopper, run 'em down, grab those hostages and bounce back across the border before anybody knows we were there."
―Dillon (from Predator)

Carl Weathers
Colonel Al Dillon[1] was a CIA agent operating in South America, covertly combating the communist rebel movement in Guatemala. He was subsequently attached to Major "Dutch" Schaefer's private military team, which was hired by the US Army and the CIA for a rescue mission in the country in 1987. Nominally in command, Dillon was responsible for the planning and execution of the mission, although the stated objective — the rescue of a captured cabinet minister — was actually a ruse to get Dutch's team to eliminate rebel forces in the area. After discovering that their mission was a set-up, Dutch's squad came into contact with a Predator that stalked and killed the elite mercenaries one-by-one.

Dillon was a close friend of Dutch's, although the deception of the Guatemala mission brought the two into conflict. He was killed when he decided to face the Predator, partly out of a desire for revenge, and partly to buy the other survivors time to escape.

"That was in '72, north of Hue. Me and Dutch both got one."
―Dillon to Poncho, regarding the lighters he and Dutch own (from Predator)

Dillon was born in South Central Los Angeles, and was the only black child to successfully escape the crime-ridden streets where he lived.[1] After joining the military, he served with Dutch in Da Nang and Cambodia during and after the Vietnam War, notably taking part in the Battle of Hue. Both men were decorated for their service there. They later served together again in Thailand, and while in the country the two men obtained lighters of some personal significance.[5]

"Some damn fool accused you of being the best."
―Dillon, to Dutch (from Predator)

By 1987, Dillon was overseeing Central Intelligence Agency operations in Conta Mana, where a rebel movement was attempting to overthrow the American-backed government. Several of Dillon's agents were reconnoitring guerrilla positions in neighbouring Guatemala when their helicopter was shot down and they were captured. Dillon subsequently assigned a team of Green Berets led by Jim Hopper to rescue them, but the men disappeared.[4] Determined to eliminate the rebels, Dillon remembered his old friend Dutch, but knew Dutch's moral code against performing anything other than rescue operations would cause him to refuse the mission; as a result, Dillon fabricated a story whereby the captured CIA agents were actually a Guatemalan cabinet minister and his aides that needed rescuing for political reasons. As he had hoped, Dutch agreed to the operation.

"Never knew how much I missed this, Dutch!"
"You never were that smart."
―Dillon and Dutch, as they drop into the jungle (from Predator)

While technically in command, Dillon deferred to Dutch's leadership once the team hit the ground. After discovering the crashed helicopter that had supposedly been carrying the cabinet minister and following some nearby tracks through the forest, the team discovered the skinned bodies of Hopper and his men; while Dillon was convinced the guerrillas were responsible, Dutch and his men were not so sure. The team soon reached the rebel camp, arriving just in time to see a hostage being executed by a Soviet military advisor. Dillon joined Dutch and his men in the assault, and the camp was quickly wiped out.

In the aftermath of the attack, Dillon's ruse finally came to light — the true identity of the hostages was discovered, and Dutch realized Dillon had manipulated him into destroying the guerrillas. When Dutch confronted him with this, Dillon merely replied that Dutch and his men were expendable assets. After ordering the team to take Anna, a surviving guerrilla, along as their prisoner, Dillon and the others moved out.

"Just hold onto that Goddamn chopper..."
―Dillon's final words to Dutch (from Predator)

It soon became clear something was hunting the team, and while several of the group questioned, what the entity was, Dillon remained confident it was merely a small group of well-trained guerrillas, mocking assertions that it may be an unknown lifeform. When Dutch elected to use the forest itself to fabricate an elaborate net trap for the Jungle Hunter, Dillon remained unconvinced, dismissing the effort as "Boy Scout bullshit". However, when he saw the creature himself during the failed ambush attempt, he grudgingly accepted the truth — the being hunting them was not of this Earth.

When a mentally unhinged Mac subsequently charged off after the creature, Dillon stopped Dutch from following, insisting instead that he should go in his place, despite acknowledging that it was likely a suicidal action. This assertion was proven correct, when the Predator confronted Dillon soon afterwards, first blowing off his right arm with its Plasmacaster before charging in and finishing him off with its Wristblades. His dying scream alerted the others to the proximity of Jungle Hunter.

"That's not your style, Dillon."
"I guess I picked up some bad habits from you."
―Dutch and Dillon, regarding holding off the Jungle Hunter (from Predator)

While he was once a close friend of Dutch's, by the time the two men reunited in Guatemala Dillon was a changed man who viewed Dutch as an expendable asset and nothing more. This, coupled with his rusty field skills — he had been assigned to a desk job at the CIA for several years — brought him into conflict with the other members of the team. Similarly, Dutch's men resented Dillon being placed in charge over their experienced and well-respected leader.

Despite this initial friction between Dillon and the rest of the team, he eventually came to respect the men around him as the situation in the jungle worsened. Ultimately, he gave his life in a desperate attempt to hold off the Predator while Dutch, Anna and Poncho escaped, and Dutch and Dillon parted as friends.

Dillon carried a Heckler & Koch MP5A3 submachine gun as his primary weapon and an M1911A1 as his sidearm, although he never had a chance to use the latter. When he later went to save Mac and confront the Predator, Dutch handed him a second MP5, and Dillon dual-wielded the weapons until his death.

Behind the scenes still of Dillon, with Jean-Claude Van Damme as the original Predator

Dillon stares down a scorpion that Mac stabbed off of his back. 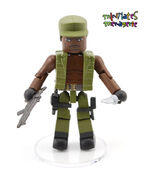 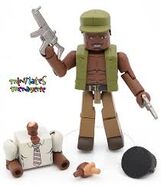