"Alright, sweethearts. What are you waiting for? Breakfast in bed? Another glorious day in the Corps. A day in the Marine Corps is like a day on the farm... every meal's a banquet, every paycheck a fortune, every formation a parade. I LOVE the Corps!"
―Sgt. Apone (from Aliens)

Al Matthews
Master Sergeant Al Apone[1] was a member of the United States Colonial Marine Corps, part of 2nd Battalion Bravo Team.[6] He was the senior non-commissioned officer with the combat unit deployed to LV-426 aboard the USS Sulaco in 2179, to investigate the sudden loss of contact with the colony of Hadley's Hope. He subsequently perished as a result of the Xenomorph infestation at the colony.

Despite a sometimes antagonistic relationship with some of the Marines under his command, notably Private Hudson, Apone was greatly respected by his men. He was taken by the Aliens in the Hive during the early stages of the operation, and was most likely subsequently impregnated with a Chestburster.[4]

Al Apone was born in Detroit, Michigan in 2137.[citation needed] Little is known about his early life or how, why and when he joined the USCM. He later achieved the rank of Master Sergeant. He was selected for the mission to Hadley's Hope due to his expertise in on-the-ground logistics and exemplary leadership abilities.[1] He was second in command of the detachment, under Lieutenant Gorman.

"Hey, Top, what's the op?"
"It's a rescue mission. You'll love it. There's some juicy colonists' daughters we have to rescue from their virginity!"
―Hudson and Apone (from Aliens)

During the initial stages of the operation to LV-426, Apone assumed nominal command of First Squad, superseding Private Hudson.[4] Apone was one of the few Marines that Ellen Ripley became sociable with prior to the mission, joking with him over the relocation of cargo on board the USS Sulaco; Apone, in turn, appreciated her efforts to help despite not being a Marine.

When the Sulaco reached LV-426, Apone readied his men for the drop in typically boisterous fashion before taking his place on board the unit's APC for the drop to the planet's surface. After breaking up Hudson's attempts to embarrass Ripley,[7] Apone led his men into the colony complex. Despite finding evidence of a firefight, the colony was deserted save for Newt, and Apone insisted they had missed the fight.

"Nobody touch nothin'..."
―Apone to his men, inside the Hive (from Aliens)

The Marines quickly discovered the colonists were apparently gathered inside the Atmosphere Processing Plant, and the squad set off to investigate. After entering the Processor, Apone and his men found themselves within the Hive.

As they progressed further into the structure, Apone received orders from Gorman that he should confiscate ammunition from everyone and deactivate the squad's Smartguns to prevent gunfire damaging the Processor's reactor. Apone began to protest, but was quickly overruled; despite being at odds with the order, he respected the chain of command and passed it on to his men, collecting their ammunition and giving Private Frost the duty of carrying it. Soon afterwards, Apone and the Marines, now armed only with sidearms and a handful of Incinerators, discovered the colonists cocooned in the Hive, including one woman, Mary, who was still alive. Almost immediately, a Chestburster erupted from her body; Apone requisitioned Frost's flamethrower, and he and Dietrich quickly torched the Chestburster.

The Chestburster's dying screeches woke the Hive, and soon Apone and his men found themselves surrounded by advancing Drones. In the ensuing chaos, Gorman tried to command Apone to lay down suppression fire with the incinerators and fall back by squad to the APC. Distracted trying to comprehend what Gorman was saying over the commotion, Apone failed to notice a Xenomorph above him ready to attack. Despite firing his flamethrower in self-defense, he was quickly attacked and hauled away by the creature. The survivors who escaped the ambush later discovered that Apone had not been killed in the attack, but was presumably being used as a host for a Chestburster inside the Hive. It remains unclear whether he died from the Chestburster, or whether he was killed by the detonation of the Atmosphere Processing plant's reactor.

"What do you want me to do? Fetch your slippers for ya?"
"Gee, would you, sir? I'd like that."
"Look into my eye."
―Apone and Hudson, sharing some early morning banter (from Aliens)

Apone was a passionate leader who had as much love for the USCM itself as had respect for the personnel under his command. While Gorman was ostensibly the senior officer aboard the Sulaco, in practice it was clear that Apone was the real leader in the unit; when he was taken inside the Hive, order among the remaining Marines rapidly disintegrated. Although he held an air of authority and strictness, this was complemented with a quick wit and explosive personality, commandeering a great deal of respect from his men due to both his effectiveness as a leader and his generally light-hearted attitude. He considered the safety of his men a priority, and he would not hesitate to question an order that he felt compromised that safety, although ultimately he would always defer to the chain of command.

Apone knew the men under his command well and could often be found laughing and sharing private jokes with his troops, even Private Hudson, with whom he often had confrontations as a result of the latter's sarcastic and insubordinate personality. Despite this jovial attitude, Apone was quick to punish any insubordination or disobedience, or put a stop to any joking that had gone too far. He was typically seen with a cigar in his mouth (even going so far as to sleep with one next to him in his cryo tube so that it would be close at hand when he woke). Unlike many of the other men in the unit, who were at best indifferent towards Ripley owing to her lack of military experience, Apone did his best to make her feel welcome, even asking her how she might be able to assist them in preparing for the mission.

Like the rest of the men under his command, Apone was outfitted with standard issue M3 Pattern Personal Armor and an M10 Pattern Ballistic Helmet, with a TNR Shoulder Lamp attachment for illumination. He also wore a watch on his left wrist.

He carried an M41A Pulse Rifle as his personal weapon, but also used Frost's M240 Incinerator Unit while in the Hive on Acheron, slinging his M41A over his right shoulder.[8] Additionally, he carried a Heckler & Koch VP70 in a fabric holster,[8] which was attached to his right grenade strap.[9] Apone also had a pair of Infrared Binoculars used to recon the colony during the squad's arrival.

There is some confusion in the film as to Apone's exact rank. The insignia he wears throughout the film is that of a United States Army Sergeant First Class (the equivalent of the USMC Gunnery Sergeant rank), yet the manifest seen on a screen aboard the Sulaco just before the crew wakes from hypersleep gives his rank as "M/SGT" (Master Sergeant). Furthermore, several pieces of Aliens memorabilia also give Apone the rank of Master Sergeant. Alien: The Weyland-Yutani Report later confirmed that Master Sergeant is the correct rank, and that the insignia he wears in the film is a goof. 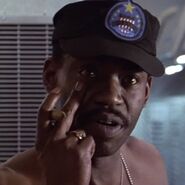 Apone in his marine gear.

Behind the scenes image of Apone. 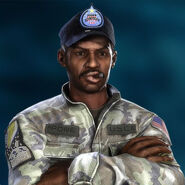 Apone, as he appears in Alien Trilogy. 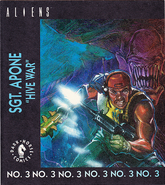 Apone on the front cover of Aliens: Hive War. 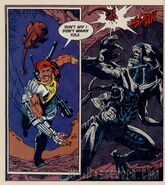 Apone as he appears in the Kenner comics. 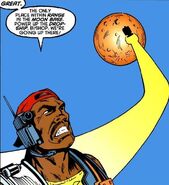 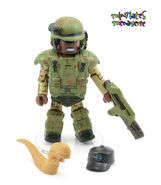