Of the many structures on the Predator game preserve, these derelict drill machines seem the most out of place. It's unknown if the rig was used by Predators then, or some other race of life forms who visited the planet. The massive rig has what could possibly be a laser cannon-like drill head and huge tank tracks. It appears to have been on the planet for well over a century. That said, the power source is still active, and when Nikolai blew himself and Tracker up with the claymores, this triggered an even bigger explosion which sent a fireball through the tunnels up to the surface. This may indeed have been the rig's power source exploding or the Predator power pack being set off.

The scale of the rig must most likely be a couple of miles long and is like a maze. Due to neglect and the length of time it has been left there, it has been encased in the tunnel which it was digging, the front of the vessel itself leading to a cave network below the surface of the planet. Noland had been living there some time and figured out all the exits and passage ways on the vessel which allowed him to sneak away from Royce and the group to start a fire. 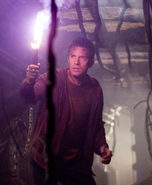 Edwin lost in the drill.
Add a photo to this gallery
Retrieved from "https://avp.fandom.com/wiki/Abandoned_Alien_Drill?oldid=153127"
Community content is available under CC-BY-SA unless otherwise noted.