The SpaceSub ASSO-400 Harpoon Grappling Gun[3] was a type of grappling gun designed for use in emergency manual docking operations.[1] One such weapon was notably used by Ellen Ripley to aid in killing the Alien aboard the Narcissus in 2122.

In 2122, a lone Xenomorph Drone got aboard the USCSS Nostromo and began killing the crew one-by-one until only Ellen Ripley was left. Ripley activated the ship's self destruct system and fled to the Narcissus with the ship's cat Jones and launched the shuttle as the Nostromo was destroyed. However, unbeknown to Ripley, the Alien was already aboard the shuttle and when Ripley discovered it hiding in the wall, she fled to the space suit locker where she donned an MK 50 Compression Suit and armed herself with an ASSO-400. Ripley then sat down at a control console and started the process to open the hatch and flush the creature out; unfortunately, the process gave off steam and the creature became agitated. The Alien then approached Ripley and when the creature was in striking distance of her she opened the hatch to the vacuum of space. The Alien, however, managed to grab the airlock door as it was being sucked out and Ripley shot the creature with the ASSO-400 getting the harpoon lodged in the Alien's abdomen. The door then closed on the harpoon's rope, tethering the Alien to the shuttle and getting the harpoon gun stuck against the door. The Alien then tried to get back in via the engine, but Ripley hit the ignition and the creature was incinerated. Ripley and Jones then went into stasis for the journey home.

Later when a salvage team discovered the Narcissus, still drifting through space after 57 years, the harpoon gun was still stuck against the door as it had been 57 years ago. Exactly what happened to the harpoon gun after the salvage team discovered the Narcissus is unknown. However it was likely taken as evidence to be used against Ripley during the tribunal into the destruction of the Nostromo.

The prop used in Alien appears to have been based on an Italian-made Seac Sub ASSO 40.[4] This was later referenced when the weapon was given an official designation in Alien: The Roleplaying Game — the ASSO-400, manufactured by SpaceSub.[3]

The ASSO-400 Harpoon Grappling Gun, jammed in the airlock door.

The Alien shot in the abdomen with the harpoon.

Ripley in a Mk.50 fires the harpoon gun.

Ripley in a Mk.50 armed with a harpoon gun.

A close-up as the barbs are deployed.
Add a photo to this gallery 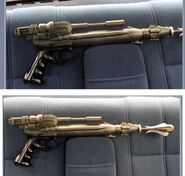 A harpoon gun prop in the back of Pat Lowry's car (Ridley Scott's driver). Images are from Dennis Lowe's Alien Makers V film.[7]

The stunt (non-firing) prop[8] used in Alien.[9] Image is from a Cooper-Owen auction catalogue.[8]
Add a photo to this gallery

Retrieved from "https://avp.fandom.com/wiki/ASSO-400_Harpoon_Grappling_Gun?oldid=246416"
Community content is available under CC-BY-SA unless otherwise noted.