watch 01:29
Wiki Targeted (Entertainment)
Do you like this video?
Play Sound

"Lieutenant, what do those Pulse Rifles fire?"
"10 millimeter explosive-tip caseless. Standard light armor-piercing round, why?"
―Ripley and Lt. Gorman (from Aliens)

The 10×24mm Caseless, designated the M309 in United States Colonial Marine Corps service, is an American-made caseless rifle cartridge notable for being the primary ammunition used by the M41A Pulse Rifle and its variants.[1]

The cartridge consists of a 210 grain (13.6 gram), steel-jacketed and explosive-tipped projectile embedded within a rectangular propellant block of Nitramine 50.[1] Although the propellant mass is small, it is highly efficient, generating muzzle velocities of 840 meters per second. The M309 is optimized for lethality against infantry wearing personal armor, with its factory pre-set impact fuse designed to explode after the round has penetrated armor to inflict maximum damage.[1] Consequently, the round is less effective against unarmored opponents, as it will often over penetrate soft targets without detonating, leaving the victim relatively unscathed and necessitating the use of multiple hits to score a kill.[2]

4.73×33mm caseless ammunition, developed for the Heckler & Koch G11 prototype assault rifle. Although not the ammunition used in the M41A, its construction is similar, giving an idea of what the 10×24mm Caseless cartridge would look like. 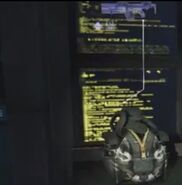 Magazines loaded with 10x24mm Caseless in a bag.
Add a photo to this gallery

Retrieved from "https://avp.fandom.com/wiki/10×24mm_Caseless?oldid=265272"
Community content is available under CC-BY-SA unless otherwise noted.